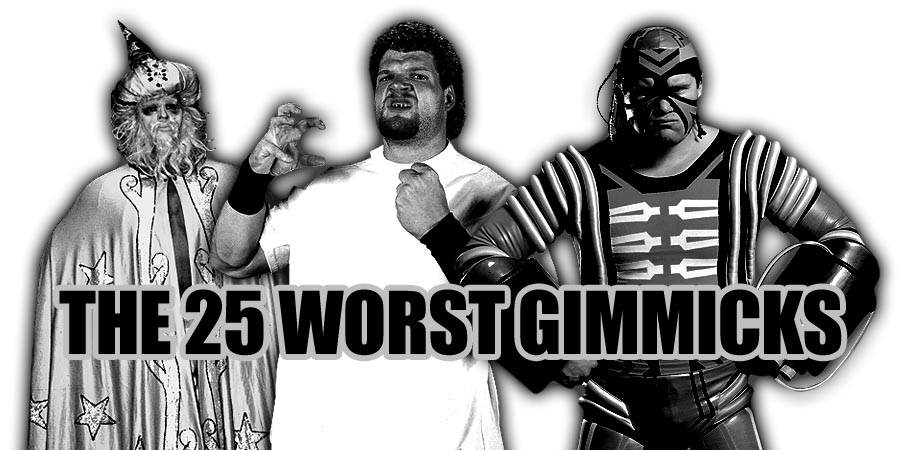 There are quite a few similar lists out there, but not a single one anywhere near as accurate as this one. Many lists cover SOME of these gimmicks, but this is the most complete list of THE WORST Professional Wrestling Gimmicks on the entire Internet. No other list comes even close, as too many bad Gimmicks were left out. Not here though!

Keep in mind that it’s perfectly normal & cool to be a fan of one or a few of these horrible Gimmicks, we all have our soft spot for some of them, yet unfortunately that doesn’t turn them into good Gimmicks.

25. The Stalker
Not even Old School NWA/WWF/WCW Veteran Barry Windham was safe from getting a weird gimmick, during the WWF’s New Generation Era. In late 1996 vignettes aired, that were clearly based on the 1987 Arnold Schwarzenegger/Jesse Ventura movie ‘Predator’. While DDP used a pretty similar gimmick (minus the face paint) in 2001 as a Heel, Barry debuted as The Stalker in a babyface role. No wonder this character only lasted a little over a month and Barry became known as Blackjack Windham, one half of the New Blackjacks.

How many of you Old Schoolers were playing the video game ‘Mortal Kombat’ during the 90s?

Those who did must have thought they saw the fictional character Sub-Zero in a WCW ring, when Glacier debuted in 1996.

Glacier, a gimmick portrayed by Martial Arts expert Ray Lloyd, was indeed based on Sub-Zero from Mortal Kombat, not just the gear but also the movements made that pretty obvious.

Oh well, to their defense, he wasn’t a famous name yet when the WWF put him in the red & black gear of Xanta Claus in 1995.

Not even Veteran Manager “The Million Dollar Man” Ted Dibiase was able to save this gimmick.

Xanta Claus only lasted a few weeks, probably because of its seasonal (christmas) character. Thank God!

Ball’s ECW days started around a year later and his Hardcore Wrestling style is what he’s remembered for.