However, we never expected to see what happened this week on RAW. It was the most shocking heel turn in recent memory. Just when The Man was gaining momentum against the opposing team, Banks interrupted to beat her down with a chair.

Bayley immediately rushed to stop Banks’ assault on Lynch, but surprisingly, she herself started hitting Lynch with the chair. The WWE Universe cheered loudly when Bayley pulled the shocker.

In this article, let’s take a look at 4 reasons why Bayley turned heel this week on RAW.

4. To Reunite With Sasha Banks 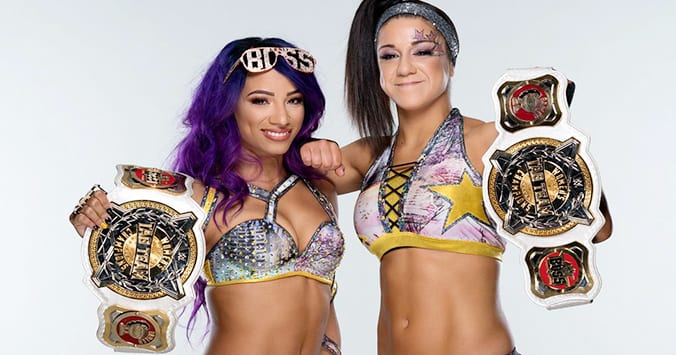 Sasha Banks and Bayley were one of the first teams to form when WWE announced the Women’s Tag Team division. Earlier this year, The Boss ‘n’ Hug Connection became the inaugural WWE Women’s Tag Team Champions by winning an Elimination Chamber match.

However, WWE dropped the ball with them and made them lose the titles to The IIconics at WrestleMania 35. This was one of the reasons why Sasha Banks walked out of WWE for a couple of months. Not only did losing the titles all of a sudden disappointed The Boss, but WWE also broke her tag team with Bayley.

WWE might have reunited Banks with The Hugger once again as a concession for the poor booking of the team earlier this year. It will give the company a chance to book them as a tag team in addition to their run as a singles wrestlers.