WWE RAW will emanate tonight from the Royal Farms Arena in Baltimore, Maryland. The build-up to the Clash Of Champions pay-per-view will continue tonight. As the match-card keeps shaping up every week, tonight we’ll get to know more about what we can expect to see at the event.

Last week’s show featured a rematch between AJ Styles and Braun Strowman for the United States Championship which ended in a disqualification after the referee saw Strowman with the chair. Moreover, Sasha Banks silenced Natalya after defeating her in a match.

Ricochet pulled an upset against Drew McIntyre to advance into the King Of The Ring quarter finals. Baron Corbin also defeated The Miz to advance into the quarter finals. ‘The Fiend’ made a cameo during the show. We also saw the formation of an alliance between Robert Roode and Dolph Ziggler, who are now the #1 contenders for the RAW Tag Team Titles. 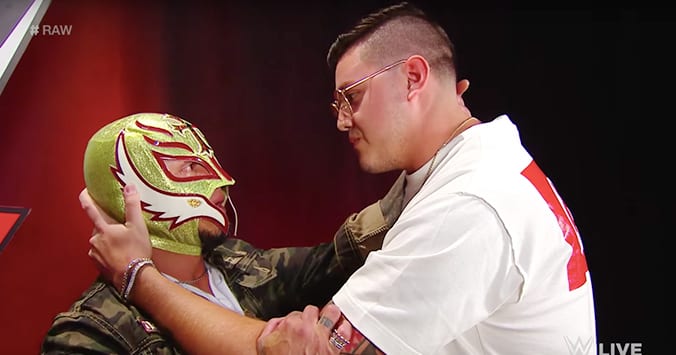 Rey Mysterio has been back in the WWE for almost a year, but he hasn’t done anything significant lately. Mysterio recently had a mini-feud with Andrade in which El Idolo completely dominated him and won two consective matches against him.

The Master Of The 619 was very disappointed by his performance over the past couple of weeks, and went as far as thinking about his retirement. However, his son Dominick consoled him and made him feel better. He went on to ask his father to team up with him.

WWE has announced that Mysterio will be returning to RAW this week. It looks like we may see an alliance between Mysterio and Dominick as Mysterio said he had a “conversation” with his son which has stopped him from retiring.

Family is the most important thing in my life. It was a conversation between my son @35_Dominik and I that kept me from making a major decision. The @WWEUniverse in Latin America this weekend was amazing … and I’m returning to #Raw next week. #Booyaka https://t.co/5u6MWW3M6J

Tonight, we’ll find out what’s in store for The Greatest Mask Of All Time.