WWE Monday Night RAW will be emanating from the Allstate Arena in Rosemont, Illinois tonight. This will be the last show of the Survivor Series weekend in Chicago.

Tonight’s show will feature the fallout from last night’s Survivor Series 2019 pay-per-view and also give a little preview of what’s to come at TLC 2019 in three weeks from now.

According to WrestleVotes, WWE is planning to do something huge tonight to close out the Survivor Series weekend.

Text from a source just now. It’s all I know at the moment so… pic.twitter.com/OlYADMFG0H

At Survivor Series, Brock Lesnar successfully retained his WWE Championship against Rey Mysterio in a Holds Barred match. The RAW roster couldn’t come out on top and ended up with only 1 point at the event. Becky Lynch also lost the Triple Threat match against Shayna Baszler and Bayley. Only The Viking Raiders were successful from the red brand. 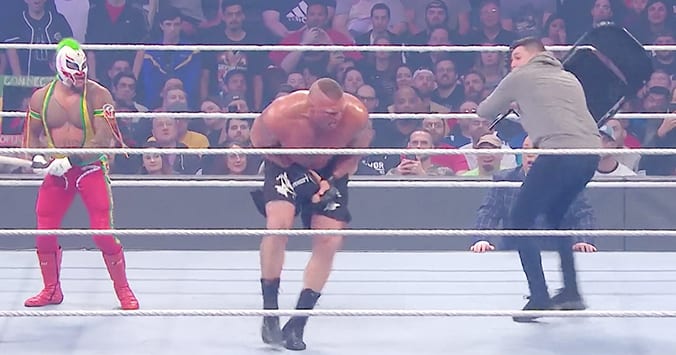 Rey Mysterio finally faced off against Brock Lesnar in a No Holds Barred match at Survivor Series. The Master Of The 619 tried to start the match by using a lead pipe, but The Beast made sure that his plan failed.

As soon as the bell rang, Lesnar got very physical with Mysterio and tossed him around the ring. Mysterio was being dominated by the WWE Champion until his son Dominick came out to make the save for him.

Both of them surprised the WWE Universe and hit Lesnar with low-blows, followed by a Double 619 and then back to back Frog Splashes. However, The Beast managed to retain his WWE Championship in the end.

Tonight, the Mysterio family may come out and explain why they tried to use the numbers game against Lesnar at Survivor Series. We might even see Paul Heyman coming out to confront them.

Lesnar isn’t advertised for the show as of yet but he may make a surprise appearance for some vengeance tonight.