Last week’s show couldn’t feature a proper fallout of Crown Jewel as the talent could not make it to USA in time, although WWE Champion Brock Lesnar made an appearance to announce that he has quit SmackDown. The show heavily featured NXT talent who invaded the blue brand to make a huge statement ahead of Survivor Series.

This week’s show will feature an appearance by Tyson Fury. Moroever, Roman Reigns will go head-to-head with King Corbin, while Sasha Banks will face off against Nikki Cross. The Revival will also defend the SmackDown Tag Team Championship against The New Day. Bray Wyatt also announced on WWE Backstage that he would be there on SmackDown this week.

In this article, let’s take a look at 8 things that could happen on SmackDown. 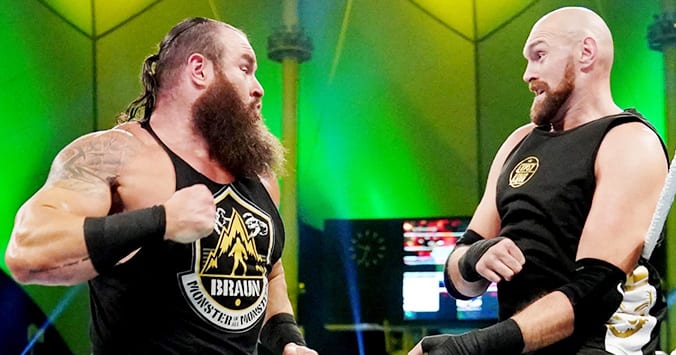 The Gypsy King made his in-ring debut last week at Crown Jewel against “The Monster Among Men” Braun Strowman. The two exchanged some heavy blows with Tyson Fury winning the bout in the end.

Braun Strowman had Fury down for the most part of the match, but one punch from the undefeated Fury changed the whole scenario. When Strowman was entering the ring after overpowering Fury, Fury hit him with one of his famous punches on the apron due to which Strwoman fell down.

The Monster Among Men could not make it to the ring before the 10 count by the referee and lost the match due to count-out. However, he did not take the loss easily and hit The Gypsy King with a PowerSlam after the match.

Fury will be making an appearance on SmackDown in which he’ll probably address his win. He may even call out Strowman for the lack of sportsmanship he displayed at Crown Jewel.

Although Fury doesn’t have any plans to wrestle in WWE as of now, but plans could change if things heat up between the two big men.