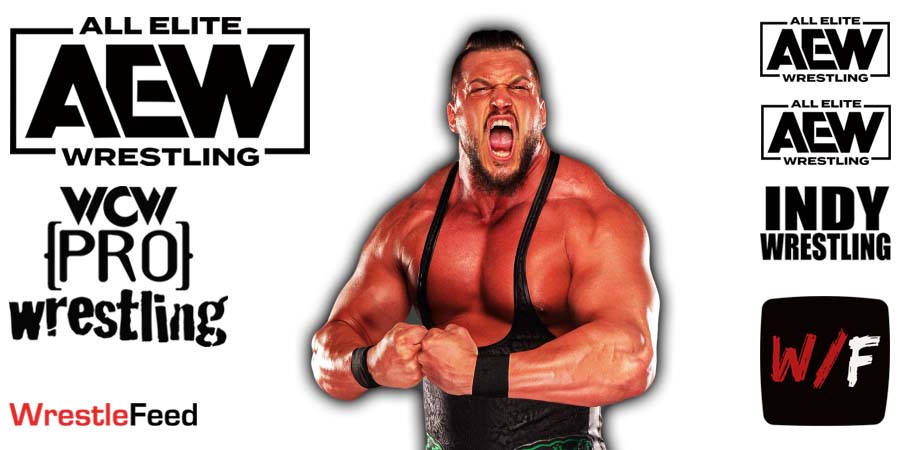 How the heck did @RealWardlow kick out of that?! @ScorpioSky is in disbelief! Tune in to #AEWDynamite LIVE on @TBSNetwork right now! pic.twitter.com/3EQS4InNHv

Matt Hardy then interrupted them. Matt said Jungle Boy trusted Christian and he betrayed him.

He said Matt is a clout chaser and will ride the coattails of his wife, his father in law, his lawnmower and his brother.

Christian even said Matt ignored his brother’s issues just to have one last tag team run with him. He said Matt is the most embarrassing person in the Hardy family, not Jeff.

Luchasaurus & Christian then attacked Matt and put him through a Table.

.@Christian4Peeps and @Luchasaurus are here to address the crowd, but @MATTHARDYBRAND has something to say! #AEWDynamite is LIVE on @TBSNetwork! pic.twitter.com/FRSBhF5IOo

.@MATTHARDYBRAND and @Christian4Peeps are not holding back on their words at all. Watch #AEWDynamite LIVE on @TBSNetwork right now! pic.twitter.com/0KnRnOhX27

.@Luchasaurus, under the direction of @Christian4Peeps, drives @MATTHARDYBRAND through the table! #AEWDynamite is LIVE on @TBSNetwork! pic.twitter.com/ls2f9AZ3yL

– Claudio Castagnoli (fka Cesaro) vs. Jake Hager (fka Jack Swagger) will take place on next week’s Dynamite. They were tag team partner in WWE many years ago.

Ricky Starks & PowerHouse Hobbs then came out. Starks said Lee & Swerve are levels below them and are not the best Tag Team in AEW.

AEW World Tag Team Champions Young Bucks came out and said they set the table for the best Tag Team Division and proposed a challenge of all 6 of them in a Triple Threat Match for the AEW Tag Team Titles at Fyter Fest.

– Eddie Kingston isn’t satisfied with his win in Blood & Guts and said he still wants to taste Chris Jericho’s blood. The Jericho Appreciation Society appeared on the titantron and Tay Conti slammed a car door on Ruby Soho’s arm for interfering last week.

– Evil Uno thanked the fans for being here in Rochester and supporting them. Dark Order is here to stay. He said that The Dark Order is forever and that they begin a new chapter.

QT Marshall came out and said -1 is no Brodie Lee and that he takes after his Mom. QT wanted Dark Order to leave and have -1 face him one-on-one.

Hangman Page came out and led the charge as he and Dark Order took turns beating down QT.

After the match, The Gunn Club turned on The Acclaimed and beat them down.

– Miro called out the House Of Black for costing him the All-Atlantic Title at AEW x NJPW: Forbidden Door.

Also Read: AEW Powerhouse Wanted To Be The Next Jeff Hardy