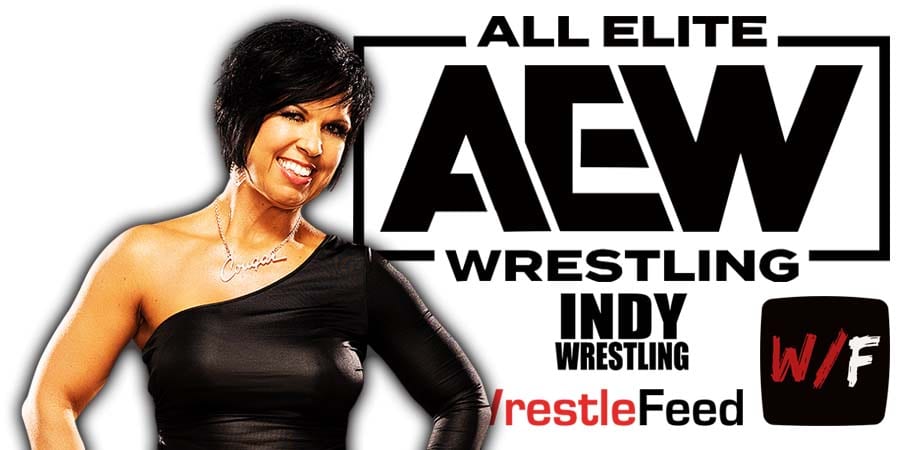 – Jurassic Express thanked Christian Cage for having Jungle Boy’s back last week, and will return the favor when he faces the Hardy Family Office.

– Ethan Page said he tried to cripple Darby Allin, but Darby just kept getting back up. Ethan said he will defeat Darby in the Coffin Match and every time Darby goes for a Coffin Drop he will remember Ethan closing the Coffin on him.

Darby & Sting then came out. Sting took out Sky with a Scorpion Death Drop, and Darby gouged Ethan’s eyes. Ethan got angry and claimed Darby knows he can’t defeat him when he’s 100%.

Ethan said he’s delaying their match for a week. If Darby keeps his hands to himself, then they will face off at Fyter Fest.

– Andrade El Idolo said Matt Sydal disrespected him last week when he interrupted his announcement. Andrade said he will make an example out of Sydal.
Andrade vs. Sydal will take place at AEW Road Rager.

– AEW World Champion Kenny Omega said he has defeated all challengers put in front of him, and thinks it’s time he took some time off and defend his other Titles.

Dark Order then came out. Evil Uno said there is someone who he can face and it’s someone they have befriended.

Omega said if it’s the person he thinks Uno is talking about, then that person will not appreciate Uno speaking for him. Omega claimed this person doesn’t have the guts to face him, that he doesn’t believe in himself and doesn’t think he can become the AEW World Champion.

– “Hangman” Adam Page confronted the Dark Order and asked why they went to Kenny Omega on his behalf. Dark Order told Page that he is afraid of failure. Dark Order reminded Page that they are here for him regardless if he wins or loses, but that they believe he can defeat Omega. Reynolds claimed that Page has waited long enough and that it’s his time now.

– Taz said neither Brian Cage nor Ricky Starks are here and that their relationship has been toxic for Team Taz. Taz announced that on July 14th, it will be Cage vs. a medically cleared Starks for the FTW Title.

Also Read: “I’m really proud of him. He taught me a lot” – AEW Star On Dominik Mysterio