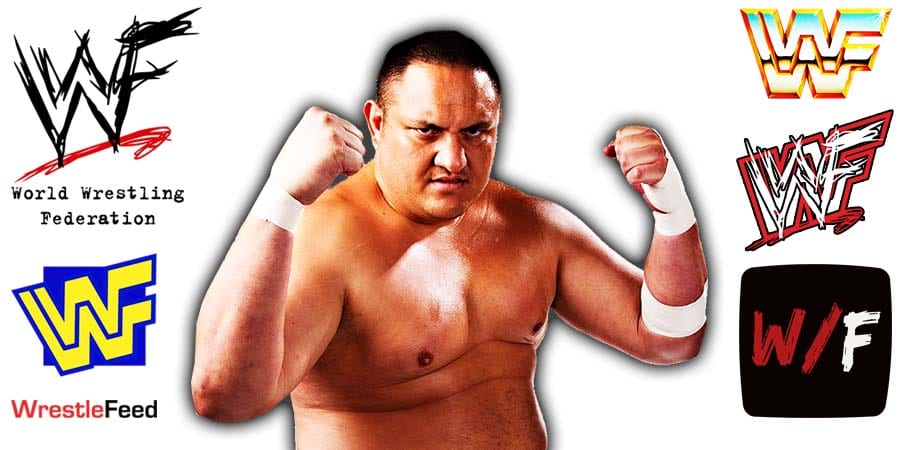 During a recent appearance on the Out Of Character podcast, NXT Enforcer Samoa Joe talked about his Universal Title program with Brock Lesnar from 2017.

Lesnar defeated Joe at the Great Balls Of Fire pay-per-view to retain the Universal Championship.

On going up against Brock Lesnar:

When I was given the opportunity, I did my best to make the most of it every time I was in the ring with him. It’s important. You’ve got to have kind of a goal post and a bar of excellence that you maintain. It’s easy when you’ve got guys like Brock, guys like Kurt Angle, guys like Roman. You push yourself because they push.

For me it’s a good symbiotic relationship, because they’re going to give as hard as they get and vice versa. Any time I get an opportunity to get in the ring with those type of performers, a Randy Orton, these are guys who are at the top of their game.

They do their very best to push their opponents. And they’re not going to give you an inch, and you’ve got to push back and can’t give them an inch. When that happens, there’s a weird symbiosis because you start producing really great stuff, because t’s a struggle out there and and you’re getting after it.”

On displaying a lot of intensity during his feud with Lesnar:

“That’s the kind of energy you’ve got to have when you’re out there with Brock. He probably won’t respect anything less than that. If you don’t show up saying you’re going to try and kick his teeth in and you’re coming after him, he ain’t trying to hear it. You’ve got to keep that energy with him. That’s kind of what I’m alluding to.

You’ve got to match that intensity. You can’t walk into this kind of half-assed and going ‘oh I hope this works out. How are you sir? Can’t wait to get out there and get after it.’ You’ve got to just go get it.

Brock has no qualms about getting into it with anybody. It makes for a nice combination.”

Johnny B Badd vs. Larry Santo