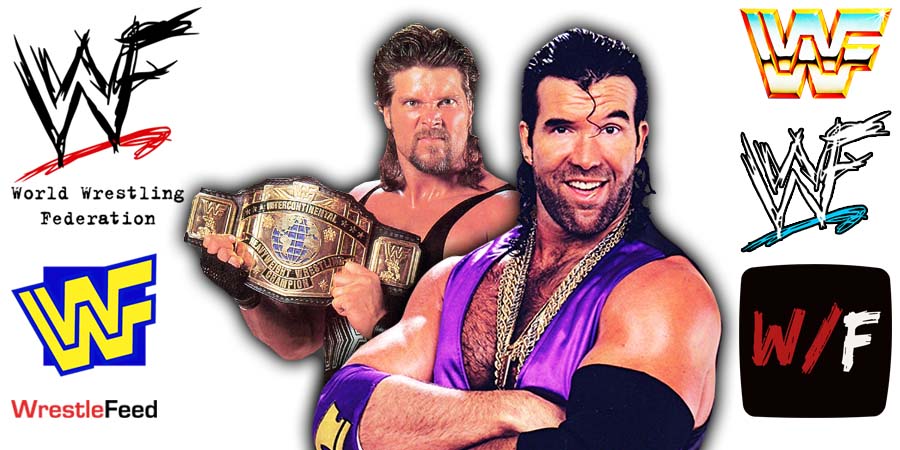 • “All the Kliq guys got on speakerphone and talked to him. We all cried” – Kevin Nash Recalls How Scott Hall Passed Away

On the 1st ever episode of his “Kliq This” podcast, 2-time WWE Hall of Famer Kevin Nash talked about the accident that led to “Razor Ramon” Scott Hall passing away on March 14, 2022 at the age of 63.

Below is what Nash said:

“People probably don’t know the breakdown as far as what happened as far as Scott passing and the timeline.

Scott was in lockdown. It was in a little duplex. It was in Smyrna, Ga. Scott was getting Grubhub and had some Chinese take out place that would bring him back Vodka.

He was making some Kool-Aid. He put the plastic pitcher up to the refrigerator. The ice went in it, but a couple of the pieces of ice as always bounced out and landed on the floor. He went over and stirred it.

I’m sure it was Crystal Light because he always ate pretty clean. He was going back to get something and one of those pieces of ice caught his heel. He did the f**king whoopsie daisy and f**king landed and broke his other hip.

He’s in the middle of his kitchen and he’s in so much pain and he can’t move. He tried to move several different times. He can’t move and finally, he passes out.

He wakes up and now it’s night time and he has no idea. He can see where his phone is by his recliner. He’s in between that and the Kool-Aid. He ends up passing back out, wakes up, and at this point is just like, ‘I’m so dehydrated’.

He’s got a defibrillator and a pacemaker in his heart. He’s like, ‘I’m going to croak if I don’t get some fluids.’ So he just turned and gutted it back to the cabinet and reached up the two hands and just drank it through the spout sip by sip. Slowly, he got enough to him that he was able to drag himself and he called 911.

They came and got him and took him to the hospital. So he went to Kennestone hospital which is like a two out of five star hospital. Scott didn’t have insurance. He needed to get the hip fixed. He had some other problems and some other issues.

They did some CAT scans. When it would be time to get Scott out of the hospital, he was going to stay with (Diamond) Dallas (Page) and recover there.

I got a call on Sunday saying Scott had 3 heart attacks and it didn’t look good. I tried to get a flight to Atlanta but couldn’t, so I went back to Daytona Beach and then couldn’t get a flight out of Daytona Beach.

At that point, they said they were going to pull the plug and the doctor said that it would be maybe 10 minutes that Scott would be alive. So before they pulled the plug, all the Kliq guys got on speakerphone and we all talked to him. We all cried was basically all we did.

7 Hours later, Scott was still alive (but then died).”

On this day in Pro Wrestling history in 1998, Paul Heyman’s Extreme Championship Wrestling held a house show in Revere, Massachusetts.