After touring the territories as ‘Playboy Frazier’, he would join the World Wrestling Federation in 1985, where he was part of a Hillbillies faction with Hillbilly Jim, Cousin Luke & Cousin Junior.

His biggest claim to fame would probably be, when he got married (for real) on a pre-taped episode of WWF Saturday Night’s Main Event in 1985.

• Allegations Against Randy Orton Being Treated As A Joke In WWE?

You can read the conversation between Konnan & Bauer about both Randy Orton & Raven below:

Bauer: Raven is a guy that…. like he was cool and super easy as long as he wasn’t jobbing. If you told he was losing, f*** dude, he was the biggest pain in the a** you could have and he just walked around with his d*ck swinging out backstage. It was like…come on, there’s no need for you to be swinging your d*ck around so all the girls can see it and whatever.

Konnan: It was hilarious. He used to do that a lot. When we would go out on the road, he would f***ing get f***ed up and we’d go, you know the boys we used to hang out at the same place, and he would literally walk around in a night club. Of course it isn’t brightly lit.

You know at night, the lights are kind of low, everybody’s f***ed up. He would literally walk around with his c*ck out and invariably bro, always… always some lady would grab it. Usually wasn’t a fine b*tch, but then again that didn’t matter to him.

Bauer: No, no, no… I’m sure that’s not the high spot he was waiting for. Backstage, I think it was like more of a rib on the boys because it was like the ratio of guys to girls was like 98 to 2 and you know, he’d just swing around. Randy Orton was another guy like that.

Randy Orton for every new writer that would show up, he’d come in the room, put his hand down his pants, pull out his d*ck and touches itself and then say : “Okay, I’m ready. Shake my hand. You don’t want to shake my hand? That’s f***ed up, man. Should I tell Steph and Vince you don’t shake Randy Orton’s hand?”

And the f***ing writers would all start f***ing sweating and backing to the corner. The guy’s d*ck is still hanging out and he’d still be cutting the promo with d*ck hanging.

Randy is one of those guys that he can be super intense and you don’t know if he’s f***ing with you or he’s really f***ing hot, you know, how you’re gonna play this. Well you start laughing and like – All right.. all right… You’re ribbing. I gotcha” and Randy – “You think this is f***ing funny?” And he’ll f***ing keep pushing and pushing you. I saw so many guys get so f***ed and freaked out.

And I was lucky because he did it to me. Like, the first day I was with the company at TV and just as he started to fucking pull his d*ck out of his pants, Stephanie walked in. And we were done. I was like I dodged the f***ing bullet.

Konnan: Would you have shaken his hand?

Bauer: Dude……….See, I’m a germaphobe. So that really f***ing would freak me out. So I don’t know. I would say I wasn’t planning on it, but based on what I saw later on with other writers that dude f***ing corners you and it is a hard deal to get out of.

It’s like, you know, first day in the job, it’s a weird thing. I’m surprised actually he didn’t get nailed for any $exual harassment that I know of because that was the thing that he would do for like pretty much the whole time I was at WWE.

Konnan: Well, that’s the thing dude. That’s one of wrestlers favorite things to do – a new person comes into the company, f*ck with them. It’s like even when a young wrestler comes in, you f*ck with them.

This story has gone viral once again and it looks like it might bring some trouble for the 13 time WWE World Heavyweight Champion, Randy Orton.

Brad Shepard reached out to WWE for a comment regarding this and revealed that WWE is looking into this matter.

I have received a response from WWE. “WWE is looking into the matter.” https://t.co/JaqAJiMiR3

However, it looks like no action will be taken against Orton as the allegations might be getting treated as a joke in the WWE.

After this week’s episode of SmackDown Live went off the air, Orton came out for a dark match and offered a handshake to a WWE worker at ringside. 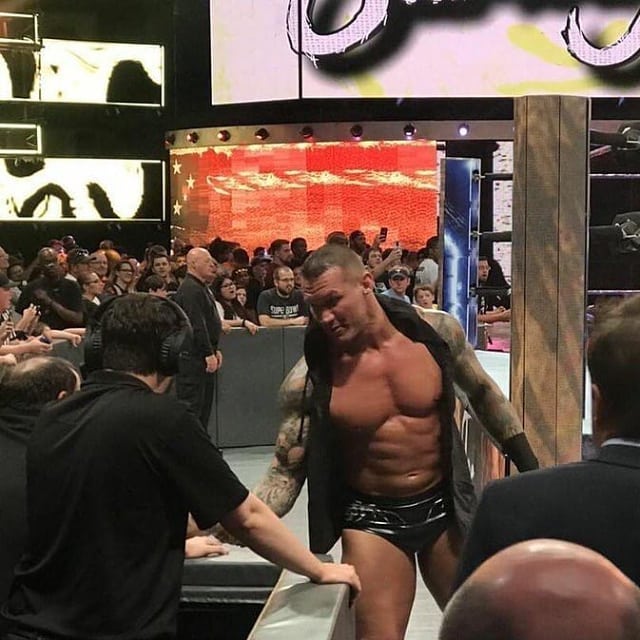 This led to both men sharing a laugh during that handshake – basically treating the allegations as a joke.

Randy Orton wrestled in the dark match main event after #WWE #SDLive. At ringside, Orton offered to shake hands with a WWE crew member and then they both had a laugh. An obvious play on the report about his alleged inappropriate behavior. Clearly, this is being taken seriously. pic.twitter.com/ZPDwiFJCxE