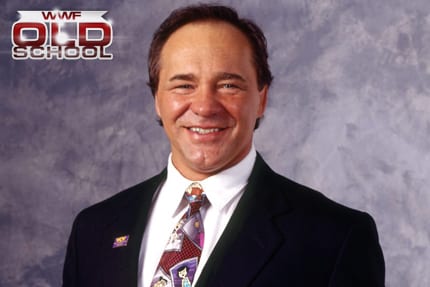 WWE confirmed on their official website that “The Living Legend” Larry Zbyszko will be inducted into the WWE Hall of Fame 2015 class.

“A true Living Legend in the sports-entertainment industry, Larry Zbyszko is the latest inductee into the WWE Hall of Fame Class of 2015.

Zbyszko got his break in the ring game in 1973, studying under fellow Pittsburgh native and WWE Hall of Famer Bruno Sammartino. He broke into WWE in the mid-1970s, making a name for himself as part of a tag team with Tony Garea and capturing the World Tag Team Titles from the Yukon Lumberjacks.

As the 1970s came to a close, however, Zbyszko longed to be seen as more than just Sammartino’s protégé. He challenged his reluctant mentor to a match, only to be frustrated when Sammartino took control of the bout. A furious Zbyszko took matters into his own hands, using underhanded tactics to stun Sammartino before viciously pummeling his mentor with a chair.

The shocking beatdown instantly turned Zbyszko into one of WWE’s most hated Superstars, with the WWE Universe piling into Shea Stadium in August 1980 to see Sammartino get payback inside a steel cage.

After his rivalry with Sammartino came to a close, Zbyszko left WWE and moved on to the AWA and Jim Crockett Promotions. Reveling in the hatred of audiences across the country, Zbyszko turned the cowardly tactic of avoiding his opponent by leaving the ring into an art form, suckering his opponents into a perfectly laid trap. The Living Legend’s mastery of the ring game led him to the top, as he captured the AWA World Championship in 1989.

Zbyszko left the AWA shortly before its closure in 1990 and joined WCW’s roster. Teaming up with the dangerous Arn Anderson, Zbyszko quickly captured the WCW Tag Team Titles. He also earned the nickname “The Cruncher” for a brutal attack that left Barry Windham with a broken arm. He also spent time under the tutelage of Paul Heyman as a member of the advocate’s infamous Dangerous Alliance.

By 1992, he stepped away from the ring and went behind the microphone as a member of WCW’s broadcast team. Zbyszko greeted the WCW faithful with a hearty salute every week, doing his best to educate them on the “game of human chess,” and fill audiences in on his latest exploits on the golf course.

Zbyszko was not afraid to lace his boots up when provoked, though. After being pushed too far by William Regal in 1994, The Living Legend got back in the ring and showed he could still hang, defeating the snooty Brit for the WCW Television Championship. And when The New World Order invaded, Zbyszko was one of the first to step up to defend WCW. With a helping hand from Bret “Hit Man” Hart, Zbyszko defeated Eric Bischoff at Starrcade 1997 and saved Monday Nitro from falling into the outlaw group’s clutches.

Now, Zbyszko cements his status as a Living Legend in the sports-entertainment world, as he takes his place in the WWE Hall of Fame’s Class of 2015.

Tickets for the 2015 WWE Hall of Fame Induction Ceremony are on sale now at Ticketmaster.com, the SAP Center box office, and by calling 800-745-3000.”