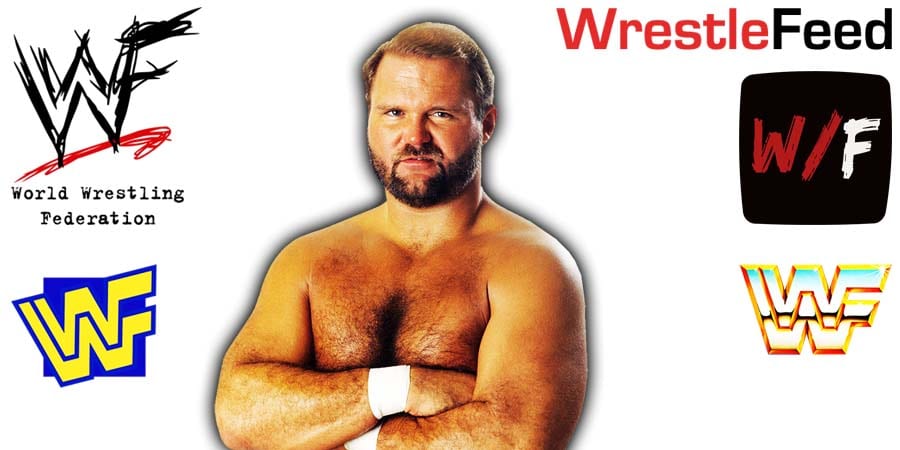 • Arn Anderson On Why He Stayed With WWE For 18 Years

During a recent episode of his weekly podcast, Arn Anderson talked about why he stayed with the World Wrestling Federation / World Wrestling Entertainment from 2001 until he was released in 2019.

The 2012 WWE Hall of Famer went to Tony Khan’s All Elite Wrestling just a few months later and still works there as the on-screen manager of his late friend Dusty Rhodes’ son, Cody Rhodes.

On the podcast, Arn revealed that his son Brock Lunde recently signed a developmental contract with AEW.

“Brock [Lunde] has been signed to a developmental contract and he’s continuing to train, he is at all the TVs and he’s been around the coaches room, he hangs out a little bit during the day and he has the opportunity to be in the room with Dean Malenko, Dustin Rhodes, myself, Jake “The Snake” Roberts, Jerry Lynn.

All sitting around bullsh*tting but you can imagine the number of years of experience and stories he’s getting to hear sitting in that room and the knowledge he can acquire just listening.

He’s a real student of the business, he watches everything, listens to podcasts and he really works hard in the gym, he has certainly by-passed me.

He’s picking up the basics and fundamentals, when he’s ready to debut, we’re always super critical of new talent that we see.

Wrestling fans are fair but judgemental, they will judge him accordingly. He won’t be without training and having paid some dues.

He’s not going to get any special treatment and I think you’ll be happy with the product you see. I’m real proud of his success so far.

It was one of the reasons I was holding on as tightly as I did in WWE because there was no AEW, I was just trying to stay connected in the business, get him through college and get him a position with NXT and the camp down there.

I wanted to get him started in the business and once he got settled in, then if nobody wants me anymore, I’ll be happy to go home and be a fan and watch him with everybody else.

That’s one of the things I’m really looking forward to and I want to see him contribute to the business in a very positive way.

It’s one of the things I’m looking forward to.”