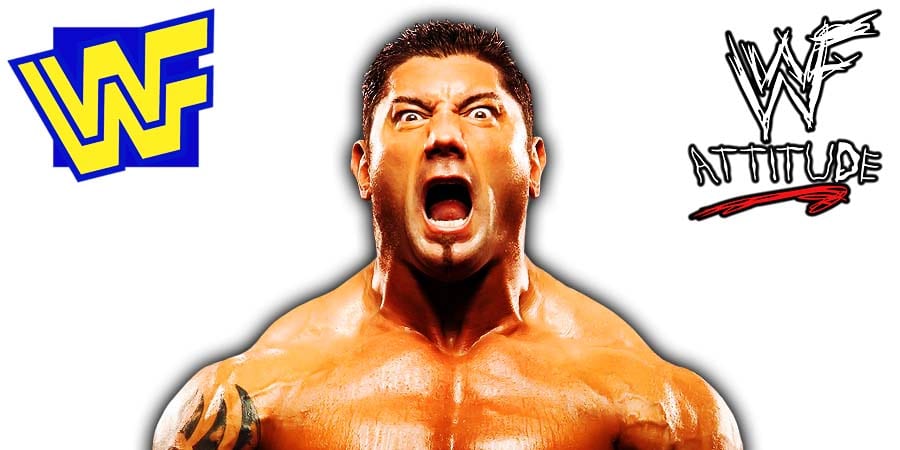 On this day in Pro Wrestling history on November 28, 1985, Jim Crockett Promotions aired ‘NWA Starrcade 1985: The Gathering’ LIVE on closed-circuit television from the Greensboro Coliseum in Greensboro, North Carolina, and The Omni in Atlanta, Georgia.

As we noted yesterday, Batista and Dana Brooke were flirting on Twitter after “The Animal” announced that he’s single again (tap here to read).

Their Twitter exchanges continued and they fixed up a date now:

@DaveBautista I mean I do workout ??‍♀️.. you know a good gym … wrestlemania is in Tampa ?? https://t.co/eirFkZvuQM pic.twitter.com/A6kBhW4dgA

I do actually! Just so happens that I have my own gym. #LionsDen .. Two squat racks! here it is. It also has an upstairs with a cage and mats as well. Ever done any jujitsu? https://t.co/7LdpVyQK0c pic.twitter.com/YpFHvt7I8u

I already can tell .. he’s gunna let me use his gym ..
Hopefully will spot me on some squats – @DaveBautista

Sounds like a date.. Also, I’m sure you can teach me a couple things I can use in the ring- also the squat racks too – I’ll send ya my number via DM text me we can plan something ??‍♀️ https://t.co/5OF543ryQd

This was Batista’s reaction after this:

Fans are really happy for these two, and even Renee Young is happy:

The world of wrestling is thriving! Such an exciting time for everyone involved. But that being said, the @DaveBautista and @DanaBrookeWWE interactions are my favourite thing going. ? pic.twitter.com/ymfVwuuyA0

I’m all for a good dating game … Twitter = tinder for me I guess … – lets take this on air – maybe a little Skype or FaceTime Date @ReneeYoungWWE #WWEBackstage – https://t.co/UyhEKLKd6a