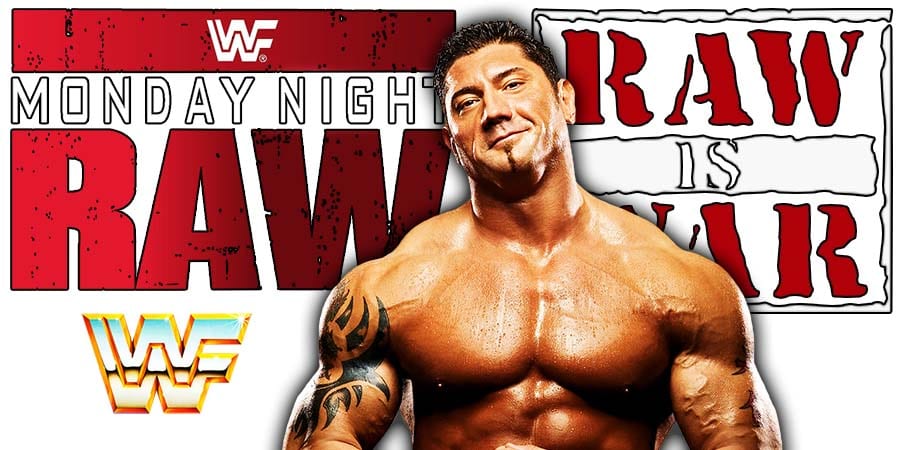 Current WWE Champion Bobby Lashley ran into Batista and posted photos with “The Animal” on Instagram.

Lashley noted in his Instagram caption that he’d be willing to give Batista a WWE Title match if he ever decides to return for a match.

“So good seeing my good friend @davebautista. And Yes I will give you a title shot if you ever return!😁 🤛🏾. Nevertheless Congrats on all your successes brotha.”

“The WWE Champion even floated the idea of a potential title showdown with Batista down the road. Lashley already has plenty of Superstars chasing his title, but the post has the WWE Universe wondering if The All Mighty Era could one day unleash The Animal.”

Batista (who was once scheduled to get inducted into the WWE Hall Of Fame in 2020, but will now get inducted at a future date) has noted multiple times during interview that he is officially retired from in-ring competition and he actually means it, and the fans will never see him in a WWE match ever again.

Batista lost to Triple H in his final match, which took place at WrestleMania 35 on April 7, 2019.

Speaking of Lashley, he will face Drew McIntyre in a non-title match on next week’s go-home episode of RAW for WrestleMania Backlash PPV.

Also Read: “I don’t want to be that guy” – Batista On The Rock’s Movie Roles