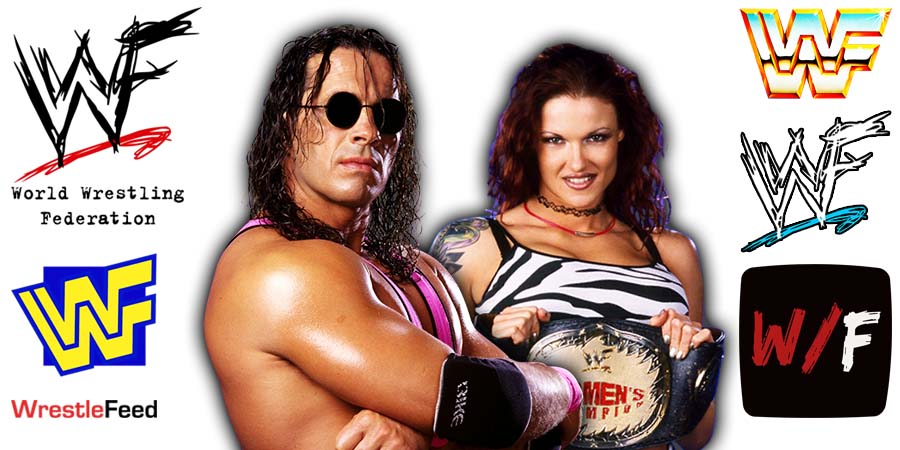 On his Hall Of Fame podcast, WCW Legend Booker T explained why Bret ended up not going to AEW (just like Lita, who was offered to face Britt Baker for the AEW Women’s World Title last year):

“They got their dream come true. Bret Hart I think, if I am not mistaken, I know FTR are big fans of Bret Hart. They would love to have Bret Hart in that position, in that role as manager.

A lot of teasing was going around in the AEW organization, Bret Hart’s name being thrown around. It seemed like the writing was on the wall that Bret Hart was going to be All Elite.

Then something happened, I heard as of late that the teasing, all of the talk about Bret Hart abruptly just, boom, stopped, like a scratched record.

It just can’t be more so WWE, Bret Hart has to have some part as far as making this happen. Then again, there’s a thought process you have to go through, ‘do I want to go to AEW?’

First of all, because, of course, this is something that is going to change my legacy. Then again, I don’t know how this thing is going to end, as far as this AEW thing. Let’s call it the AEW experiment.

WCW lasted for 12 years, people don’t realize that. People think WCW was a company that was around since the early 80s. It lasted 12 years, the AEW experiment, man, we are in the infancy stages.

I can see certain people going over there like a William Regal. Look, if I get released, if there’s a job over here waiting for me, dammit, I am going to go get it. But if I am someone like Bret Hart, who has very, very high value to a company like WWE, I am going to negotiate with that company.

Say, ‘Hey man, look, do you guys actually want me to go over here? Because, I do need a job, I do need some money.’

So, I can see it happening that way, Lita was almost going to go in AEW for a minute. I am sure she had to think the same thing, ‘is this something I really want to do?’ Change my legacy and go to AEW? I don’t know how long this AEW experiment is going to last.

Did AEW lose out on not getting Bret Hart? Yeah, I think so. But that’s going to be something that they’re going to have to deal with throughout the tenure of AEW going forward.”

Also Read: “That did not make him look like a boss” – Booker T Says Tony Khan Is Falling Into A Trap

This episode was pre-taped at the New Haven Coliseum in New Haven, Connecticut and featured matches, promos & storyline segments on the road to the ‘WWF SummerSlam 1988’ PPV.

1. The Ultimate Warrior vs. Joe Milano