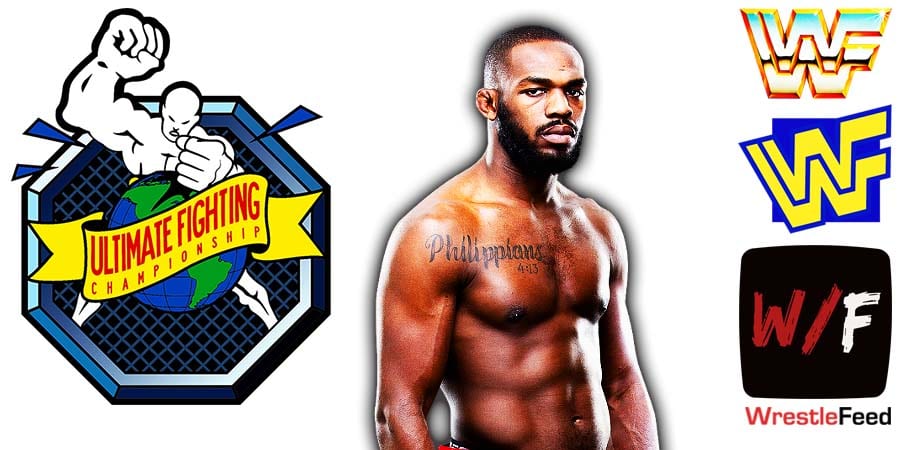 Jones tweeted the following about it:

“Breaking News!! I’m excited to announce I’ll be competing for the number one grappling organization in the world, Fury Grappling!

A fan then pointed out how Hager works in All Elite Wrestling now, and not WWE. Jones then replied:

“Thanks, yeah I just found out today. Don’t really know much about him yet.”

UPDATE: Jake Hager Reacts To Jon Jones Announcing That He Will Face Him

Jones was recently inducted into the UFC Hall Of Fame (Fight Wing) for his UFC 165 fight against Alexander Gustafsson.

For those who don’t remember, Jones called out Brock Lesnar at UFC 214 in 2017. Here’s what he said:

“Brock Lesnar, if you want to know how it feels like to get your a$$ kicked by a guy who weighs 40 pounds less than you, meet me in the Octagon!”

Jones’ last fight took place in February 2020 at UFC 247, where he defeated Dominick Reyes to retain the UFC Light Heavyweight Championship. Jones then vacated the Title and announced that he’ll be moving up to the Heavyweight division.

“I just don’t want to feel smaller than any of the guys. I want to be more conditioned, more skilled and just as strong, if not the strongest guy.

Going from Light Heavyweight to Heavyweight is like jumping three weight classes. I just want to do it right.”

Jones noted that he’d be open to fighting former 2-time UFC Heavyweight Champion Stipe Miocic, but not right now since Miocic is not the champion.

He is looking to fight the winner of the Francis Ngannou vs. Cyril Gane fight at UFC 270 in January 2022, which will be to crown the undisputed UFC Heavyweight Champion.

This episode took place at the TNA Impact Zone in Orlando, Florida and featured matches, interviews & storyline segments on the road to the ‘TNA Final Resolution 2008’ PPV.