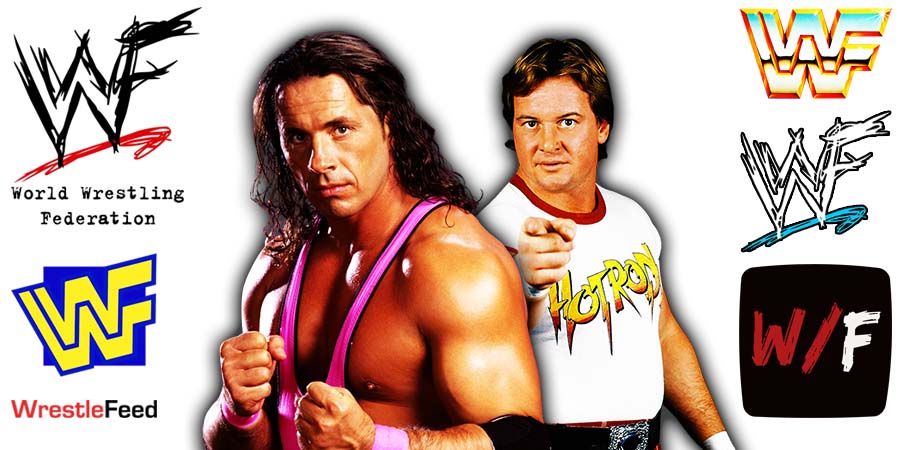 Old School WWF Legend Jacques Rougeau was interviewed on a recent edition of the ‘It’s My Wrestling’ podcast, where he revealed that Bret ‘The Hitman’ Hart refused to put over ‘Rowdy’ Roddy Piper by losing the WWF Intercontinental Championship to him in early 1992.

This led to Bret losing the Title to The Mountie (Jacques), who only held the Title for a few days and lost it to Piper at the 1992 Royal Rumble PPV.

“Bret is the greatest nicest guy to be around, but he’s a hard businessman. He does not like to do favors to just anybody. He had a different philosophy of becoming a superstar which he managed to do very well.

He had a different philosophy where if you lose it’s not good for your character but we’re all working together. So it was hard to do business.

I know for a fact that when Bret had to drop the Title to Roddy Piper at the pay-per-view, he didn’t want to do it. So what Vince did was he took me as the guinea pig to put in between just to do this switch to get it from me to him.

Bret when he lost to me for those two days I had it, he came in with 104 fever. He’s in the ring that night when he defended the Title and he had the announcer announce that ‘I’m sick, I’m dying, but I’m gonna wrestle anyway’.

So I beat that guy, I didn’t beat anybody, I just beat a guy that was sick and dead. So Bret was hard like that in life, you know?

And, and that’s where they had the screw job with Bret also with Shawn Michaels in Montreal, because Bret didn’t want to give the Title back to Vince when he was going for another company. So he was a hard guy to deal with.”

From 1986 until 1990, Jacques wrestled as one half of The Fabulous Rougeau Brothers alongside his real-life brother Raymond Rougeau, before receiving a singles run as The Mountie in 1991 & 1992, and eventually became a member of the WWF World Tag Team Champions The Quebecers with Pierre (current IMPACT Wrestling Superstar PCO) from 1993 till 1994 and also for one final run in 1998.

• ON THIS DAY IN WRESTLING HISTORY (February 13, 1987) – Calgary Stampede Wrestling

On this day in Pro Wrestling history on February 13, Bruce Hart’s version of Calgary Stampede Wrestling aired an episode of their weekly TV Show.

This episode included powerlifter & Strong Man Bill Kazmaier in a singles match, who was one of the absolute strongest people back then and is still considered one of the strongest men of all time, not just in professional wrestling but in general..