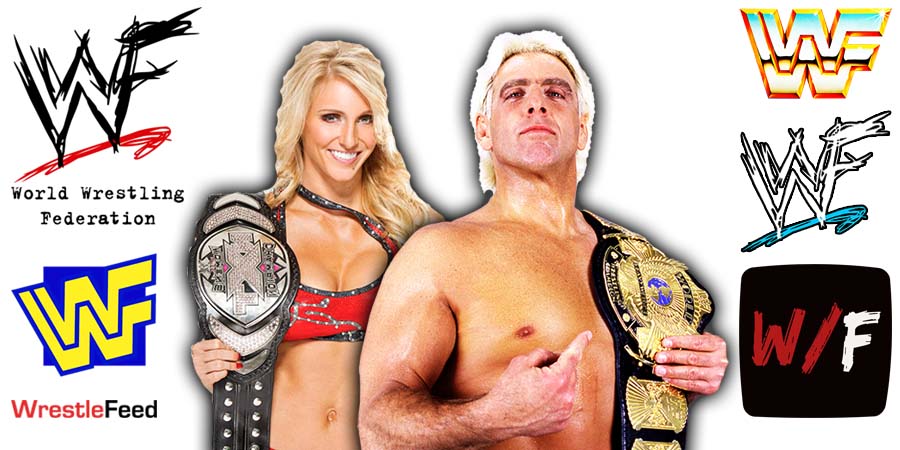 At this event, she lost the SmackDown Women’s Championship to Ronda Rousey in an “I Quit” Match.

The Queen has been on a hiatus ever since, and even got married to AEW wrestler Andrade El Idolo during this ongoing time off.

During the latest episode of his “To Be The Man” podcast, 2-time WWE Hall Of Famer Ric Flair said that he doesn’t know anything about his daughter’s return to WWE TV because she doesn’t tell him this kind of information.

“To be very honest, I have no idea. She keeps everything to herself. I know she’s talking to the company, but I don’t know any more than that.

If I did, I couldn’t tell you anyway. She doesn’t trust me to tell me anything because I can’t keep my mouth shut.”

Flair has previously noted that he’d like to see Charlotte take on RAW Women’s Champion Bianca Belair at WrestleMania 39.

Ric once again stated his desire to see this match:

“[Charlotte] is probably in the best shape of her life. I think it’s probably a mutual decision between her and the company as to when she comes back. I would assume under the perfect circumstance.

She’s the best wrestler, but she’s the greatest female wrestler of all time. Like I said before, to have two legit world class athletes, you could write the story itself. NCAA track star. Strength, coordination, athleticism, Bianca Belair, Charlotte Flair.

It’s a main event in itself. In my opinion, that’s the match.”

It was pre-taped at the Reunion Arena in Dallas, Texas and featured matches, interviews & storyline segments on the road to the ‘WWF Survivor Series 1998: Deadly Game’ PPV.

The Godfather vs. Marc Mero