It was pre-taped at the First Union Center in Philadelphia, Pennsylvania and featured pre-taped matches & storyline segments on the road to the ‘WWF Backlash 2000’ PPV.

3. Rikishi Phatu vs. The Big Show

Many of you were entertained in the world of professional wrestling by ‘Kamala’ the Ugandan Giant, aka James Harris. James is in desperate need right now to spare his home. If his taxes are not paid in full by April 15th, the county will take his home, as verified by the Tate County, MS Tax collector.

James ‘Kamala’ Harris is a double amputee and must go to dialysis 3 times per week, for his diabetes. Even though James made decent money in the wrestling industry, there is proof that he often did not receive the same payoffs as many of his opponents. Why? Was it because he was a ‘Yes’ man to the promoters? Maybe his race in some instances? Could it be his unbelievable kindness to everyone? I don’t know the answers but I do know that James, his wife and family need us all right now!

I humbly implore you to donate whatever moves your heart, to save the Harris residence…it’s basically all that they have, other than a Ford Excursion with almost 400,000 miles on it and a lot of love in their hearts.

The GoFundMe that was set up to help Kamala had a goal to raise $12,750 and that goal has been surpassed, thanks to all the people that donated, especially Chris Jericho – who ended up donating $5,000!

Below is a screenshot of Jericho’s donation: 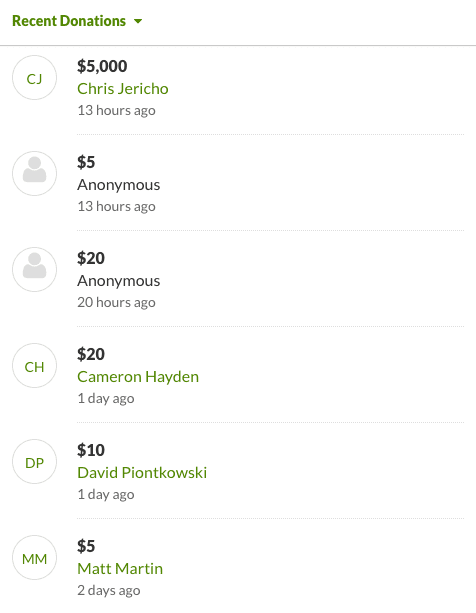 This is what you call ‘The Gift Of Jericho’!