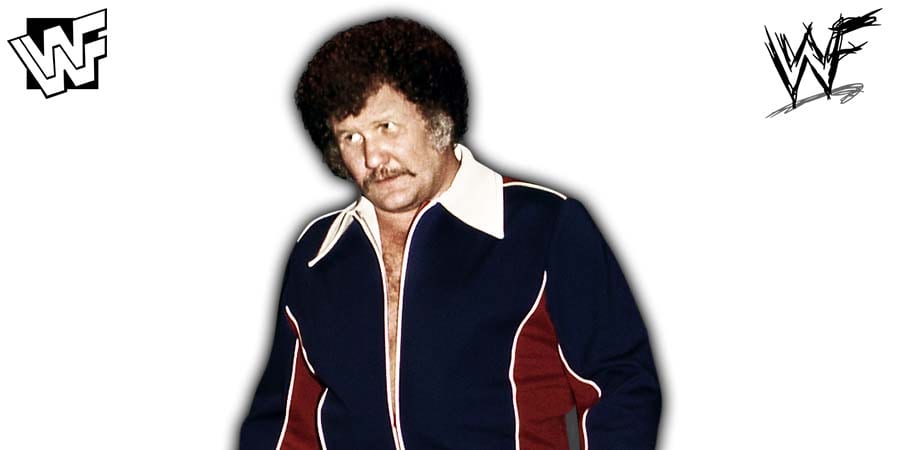 On why he’s getting a Harley Race tattoo:

“The Harley Race tattoo is in motion. For sure [I have] two [sports tattoos] – I’ve got the cup for the Hawks and I got a little goat after the Cubs won the World Series. I guess the Misawa boot would be #3, I don’t know if I have any other wrestling related tattoos.

On Andre the Giant being afraid of Harley Race:

“Andre was supposedly afraid of Harley. There’s two guys that Andre ‘supposedly’ – because obviously, I never met Andre, just hear the stories. It was Harley and it was Haku. Those were the two that Andre – and people would tell me, ‘Well, he’s afraid of them.’

I don’t know if he was afraid of them but he knew not to mess with them. I think that speaks volumes, you know? People always talk about how tough Harley was, and he was. He could be a tough, mean, SOB.”

On his favorite Harley Race story:

“My favorite Harley story – It was his birthday, and we were in the bar, and we’re celebrating Harley’s birthday. And then all of a sudden, the waitress comes up and she’s got a tray of shots.

She puts the tray down and she’s putting shots in front of everybody. And there must have been, I don’t know, 20 or 22 of us in the bar. It’s Harley and all the wrestlers, you know?

We just did a show in Eldon, Missouri and we’re in the bar eating and hanging out afterwards, and it’s his birthday so Harley got everybody shots. And the waitress puts one down in front of me and I said, ‘Can you get me a shot of soda? Whatever you’ve got – Coke, Pepsi, cranberry juice, whatever. And she was like, ‘Honey, Harley Race got you that shot. You’ve got to drink it.’

And finally, Harley comes over and explains to her, ‘Oh, he doesn’t drink.’ And that was the end of it, like she didn’t say anything else,” Punk continued. “She went, ‘Oh okay, I didn’t know’, even though I had already told her a thousand times. Like it was supposed to be this big slight, like, ‘Oh I’m not going to drink a shot’… In a second, [Harley] didn’t care.

He just said, ‘That’s Punk, he doesn’t drink.’ That’s it, that was it and so that was the moment where I was like, ‘Holy sh*t, this guy respects me. How cool is that? I’ve made it; I don’t need anything else – not money, not fame, not belts. Like, this guy was the closest thing to a living hero.

So then I of course had to push the envelope. I felt a little bit left out that I didn’t get a shot, everyone else did, and Harley toasted when it’s his birthday. So, I walk up to the bar, I belly up, and I go, ‘Do you guys have milk?’

And nobody wanted to touch their milk until Harley picked it up and raised his glass. And everyone raised their glass, made cheers with Harley Race, shot of milk.”