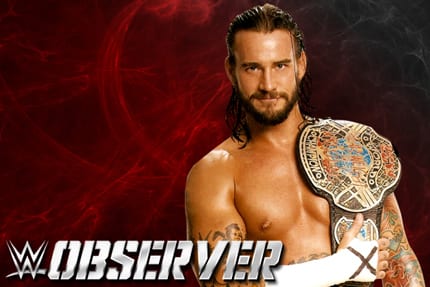 In a recent interview with FOXSports, CM Punk talked about his recent MMA scrimmage bout that he lost, MMA training, UFC fight debut, worst part about his time in WWE, chances of returning to WWE and more. Below are a few highlights:

“Sparring debut, yeah. …It’s a baseline going forward to watch and review. And see what I did good at and what I did bad. …We taped it. I’m going to watch it and dissect it. People ask me if I was nervous. There wasn’t a single nerve, I wasn’t scared. It’s part of training. I wanted to do it a lot sooner than they allowed because I figured the sooner I’m doing it, the more often I’m doing it, the better I’ll get. Now we’ll know what I need to work on more. And to me, that’s what I love about MMA: Everything is different. I sparred with a tough SOB wrestler who’s a southpaw, and who’s to say when I fight if the guy is going to be a lefty, if he’s going to be a striker or a wrestler, you know what I mean? Every day I’m in here I’m growing leaps and bounds, and I tend to kind of leave that up to the coaches. People ask me, “How are you doing?” And I just kind of say, “Hey, I don’t know.” All’s I know is I’m in there every day and I’m working hard. And I’m getting beat up in here so I don’t get beat up in the Octagon.”

Timetable for his UFC debut

“No, I started here in January. In my mind, I’m shooting for the end of the year (to make my UFC debut). So, October at the earliest, December the latest. If they tell me I’m a whiz kid after six months and they think I’m ready; it might be earlier and it might be later, I don’t know. I know that’s a very vague answer, but I’m taking this extremely seriously. …”

How often he trains

“I definitely look at it as a full-time job. I’m here every day of the week. I take weekends off. But I’m here and I train with the pro team every day for two hours. Then some days I do two-a-days, so I’ll come back. I live in Chicago, so I’m driving back and forth. Or some days I’m staying up here. So on those days, normally two days a week I come back and do extra, or even when I’m at home I’ll do strength and conditioning, run. I’m very much all-in on this.”

Worst part about his time in WWE

“The worst part of it? After a while, I would say the worst part of it was their not listening and not understanding, and not getting a break when I probably needed one. Because who’s to say where I’d be right now? They’re always looking for the next guy, so nobody is really bigger than the company. Not that I ever thought I was, but I thought I was a pretty healthy cog in the machine. I thought I could’ve been afforded a vacation here or there.”

Chances of returning to WWE

What he would have done differently in WWE

“Like I said, I don’t live my life with regrets. I don’t even think there’s really situations where I wish I would’ve handled myself a little bit differently. I wish I would’ve punched one or two people in the face. But, no, I wouldn’t change a damn thing. Absolutely not.”