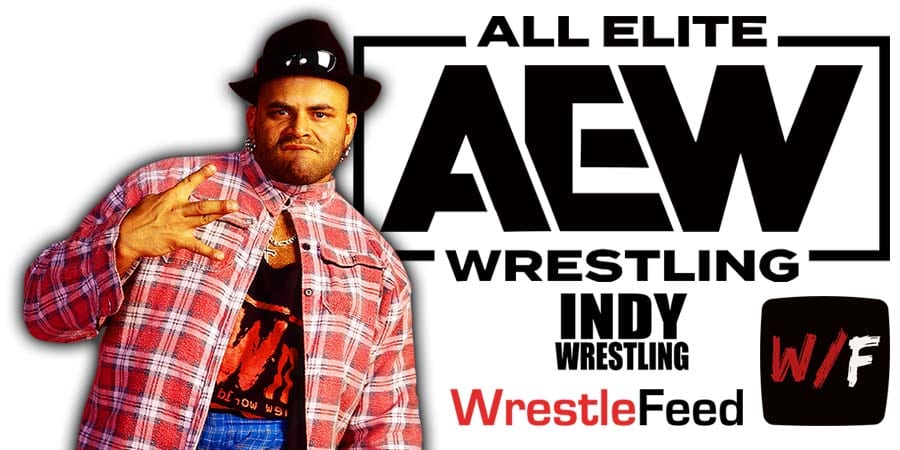 – Dynamite kicked off with Shawn Spears attacking Sammy Guevara with a Steel Chair in the parking lot.

– Konnan & Tully Blanchard meet face-to-face. Konnan said he won’t be intimidated by Tully. That he Santana & Ortiz have a bond since they all lived in the streets. Tully said he’s researched Konnan, but he doesn’t know who he’s dealing with.

Tully said he can have FTR take out Konnan. Konnan said after everything is done, Tully can be a greeter at Walmart.

Konnan called out Santana & Ortiz but it’s revealed to be FTR in disguise. FTR attacked Konnan and took him out with a Spike Piledriver.

– Vickie Guerrero said she and Andrade El Idolo have a big announcement. As she’s about to say what it is, Matt Sydal came out for his match and she didn’t make the announcement.

– Christian Cage offered Jungle Boy some advice before his match against Kenny Omega. Christian said that Jungle Boy shouldn’t be satisfied with just getting a shot at the AEW World Title, that he should shock the world and win it.

– Chris Jericho & Jake Hager attacked MJF, Wardlow & Shawn Spears, but they get overwhelmed. MJF tried to break Jericho’s arm, but Sammy Guevara came out with a Steel Chair and chased them off. Sammy told MJF that next week he will show him that he’s the best.

The brawl between the Inner Circle and Pinnacle spills out into the ring, and @sammyguevara shows up to even the odds…. Tune into @tntdrama now to watch #AEWDynamite LIVE! pic.twitter.com/cJsHeFlu5t

– TNT Champion Miro said that the bravest moment in Brian Pillman Jr.’s life was last week when he thought about attacking him, and that the stupidest moment in his life was when he followed through and did it.

– Vickie Guerrero announced in a backstage segment that Nyla Rose will challenge Britt Baker for the AEW Women’s World Championship on Night 2 of AEW Fyter Fest.

– Kenny Omega (c) def. Jungle Boy to retain the AEW World Championship (After the match, Omega tried to hit Jungle Boy with the Title belt, Christian Cage made the save. Matt Hardy & Private Party then attacked Christian. Hardy was about to hit the Twist of Fate, but Christian countered and was about to hit the Killswitch, but AEW World Tag Team Champions The Young Bucks laid out Christian with a Double Superkick. Hardy then hit Christian with a Twist of Fate. The heels posed to end the show)

What a WILD ending to Saturday Night #AEWDynamite! pic.twitter.com/ZvOwKmqzTW

This episode was broadcasted from the Madison Square Garden in New York City, New York and featured matches, interviews & storyline segments on the road to the ‘WWE Vengeance 2003’ PPV.