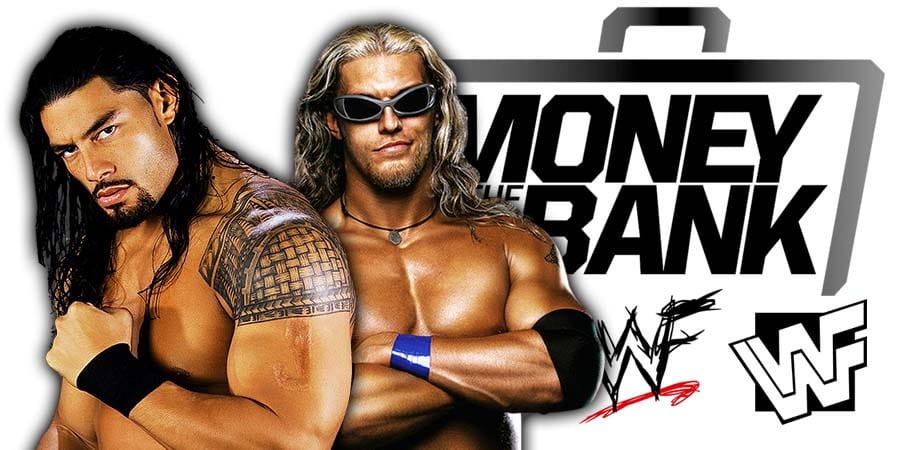 On last night’s episode of SmackDown, Universal Champion Roman Reigns and Paul Heyman came out for a promo segment. Heyman listed all the names that Reigns has defeated and said there’s no one left.

Edge then came back and began brawling with Reigns. Edge was setting Roman up for a Con-Chair-To, but Jimmy Uso made the save. Edge then speared Jimmy through the ringside barricade. Edge sent a big message to the Head Of The Table to end SmackDown.

WWE has now officially announced Roman Reigns vs. Edge for the Universal Championship as the main event of next month’s Money In The Bank 2021 pay-per-view (which will take place in front of a live crowd).

This morning on Talking Smack, it was revealed that Edge went to Adam Pearce and Sonya Deville after SmackDown went off the air to demand a one-on-one Universal Title match against Reigns at Money In The Bank and it was made official.

“Ask and you will receive.

Paul Heyman isn’t happy with this decision and tweeted the following:

Are you aware of the fact there is a difference between ASK and DEMAND?

And yet, you use both to describe @EdgeRatedR’s abhorrent conduct up in the faces of the sweat-drenched @ScrapDaddyAP and the lovely @SonyaDevilleWWE?”

Are you aware of the fact there is a difference between ASK and DEMAND?

And yet, you use both to describe @EdgeRatedR's abhorrent conduct up in the faces of the sweat-drenched @ScrapDaddyAP and the lovely @SonyaDevilleWWE?@WWERomanReigns @peacockTV #MITB https://t.co/q7szuTBRXj

Here’s the updated match-card for Money In The Bank 2021:

– Men’s Money In The Bank Ladder Match: Ricochet vs. John Morrison vs. Riddle vs. Randy Orton OR AJ Styles OR Drew McIntyre vs. Big E vs. Sami Zayn OR Kevin Owens vs. TBA vs. TBA

– Women’s Money In The Bank Ladder Match: Asuka vs. Naomi vs. Alexa Bliss vs. Nikki Cross vs. Carmella vs. Liv Morgan vs. TBA vs. TBA

This episode was broadcasted from the Cumberland County Crown Coliseum in Fayetteville, North Carolina and featured matches & storyline segments on the road to the ‘WWE SummerSlam 2006’ PPV.