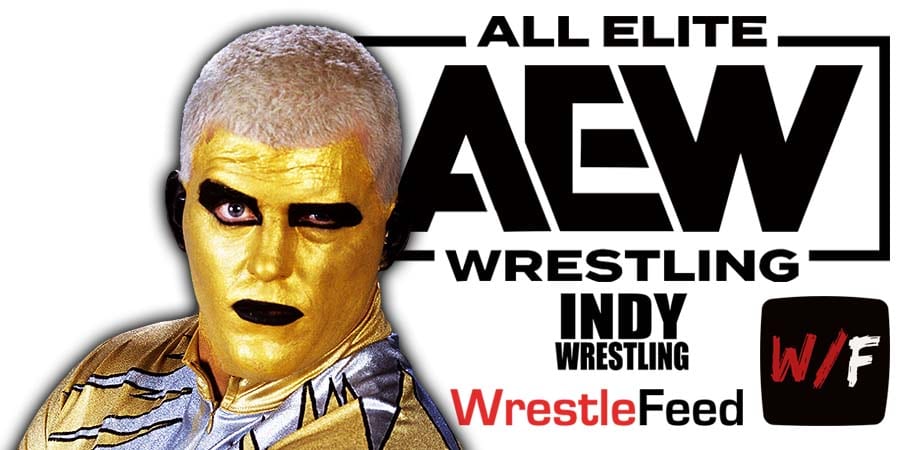 – Sting came out for an interview with Tony Schiavone in the ring.

Tony asked Sting why he joined AEW, and Sting talked about how Dusty Rhodes helped him when he was coming up in WCW and that Dusty made him a main event star by giving him the face-paint gimmick.

Sting then said he carried “the jungle” for all those years and he’s happy to see “the jungle” is still alive and thriving.

Sting wanted to be a part of “the jungle” again and see what Dusty’s offspring, Cody Rhodes, is doing here by leading the charge.

Team Taz then confronted Sting and were about to beat him, but TNT Champion Darby Allin showed up in the ring with his skateboard and Sting took out his Baseball Bat, and the heels backed off.

The war of words raged on between #TeamTaz, @Sting & your TNT Champion @DarbyAllin.
Watch #AEWDynamite NOW on @TNTDrama. pic.twitter.com/gUncMvhStb

Darby will defend the TNT Championship against Brian Cage on the January 6th episode of AEW Dynamite.

– AEW World Champion Kenny Omega said he’s worried he might hurt Rey Fenix and take him out in their title match next week.

– Pac def. The Butcher (Lance Archer and PAC had a face-off after the match)

– Kip Sabian and Penelope Ford will get married in a beach themed wedding on the February 3rd episode of Dynamite, which will be the “Beach Break” special

– Dustin Rhodes def. Evil Uno (Dustin once again refused to join Dark Order after the match and beat up Evil Uno. A brawl then broke out and the babyfaces cleared the ring)

– During a sit-down interview with Tony Schiavone, Shawn Spears accused AEW management of holding him down

This fight between @shidahikaru & @abadon_AEW is getting out of hand!
Watch #AEWDynamite NOW on @TNTDrama. pic.twitter.com/vteEELdx1c

It was pre-taped in Greenville, South Carolina and featured mid-card matches on the road to the ‘WWF Royal Rumble 2001’ PPV.