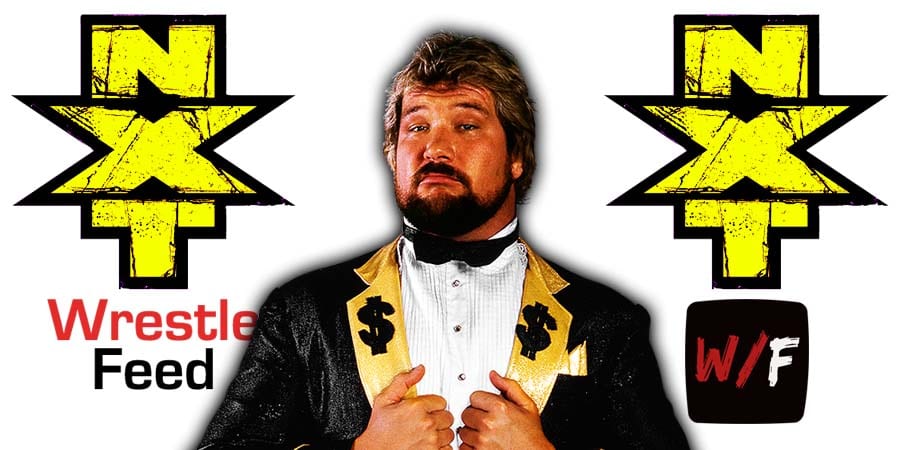 – NXT Champion Karrion Kross said three weeks ago he issued a challenge to anyone to step up and face him for the NXT Title, but everyone is afraid of him. Kyle O’Reilly, Pete Dunne and Finn Balor came out. Everyone wants a shot for the Title and start fighting. Johnny Gargano & Austin Theory came out and attacked Kross.

– Another vignette is shown for the Diamond Mine.

– Legado Del Fantasma issued a challenge to MSK for the NXT Tag Team Championship. NXT Cruiserweight Champion Kushida interrupted and challenged Santos Escobar to a rematch for the Cruiserweight Title. Escobar accepted his challenge. It will be a 2 Out Of 3 Falls match next week.

– Cameron Grimes was trying to get into a club called The Vanguard, but the bouncer said the entire club has been rented out.

WWE Hall of Famer “Million Dollar Man” Ted DiBiase then came out of a limousine and said, “Don’t just rent a booth… when you can buy the whole place!” and “Everybody’s got a price for The Million Dollar Man!”, followed by his signature laugh.

DiBiase then entered the club, while Grimes was left throwing a fit outside.

"Don't just rent a booth… when you can buy the whole place!" 💰💸💰💸#WWENXT @MDMTedDiBiase @CGrimesWWE pic.twitter.com/aLavQ1LkrE

Below is the match-card for next week’s episode of NXT:

– 2 Out Of 3 Falls Match For The NXT Cruiserweight Championship: Kushida (c) vs. Santos Escobar