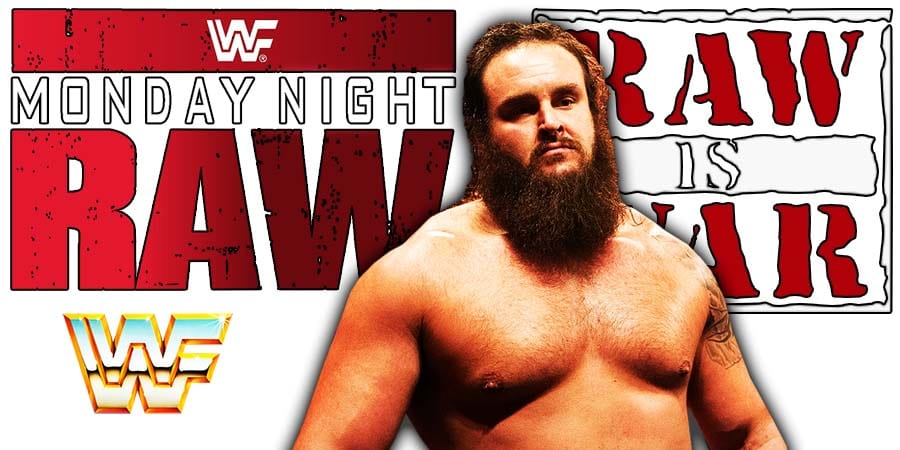 – Braun Strowman def. T-BAR & MACE via DQ in a 1 on 2 Handicap Match (T-BAR & MACE kept attacking Strowman after this opening match on RAW and Drew McIntyre made the save and it turned into a Tag Team Match)

– T-BAR & MACE def. Braun Strowman & Drew McIntyre via Count-Out (Strowman got angry at McIntyre after the match and took him out with a PowerSlam)

– Sonya Deville said Adam Pearce rushed to suspend Charlotte Flair last week, but she wanted to hear Charlotte’s side of the story.

Charlotte came out and apologized to Referee Eddie, Pearce and the WWE Management for her wrongs. Ref Eddie accepted her apology.

Sonya said Charlotte paid her $100,000 fine and her suspension is over. She said Charlotte will have a match later tonight with Ref Eddie being the referee for her match. Charlotte demanded an apology from Ref Eddie, and he gave one.

– Drew McIntyre vs. Braun Strowman got announced for the main event. If Strowman wins, he will be added to the WWE Championship match at WrestleMania Backlash.

– United States Champion Sheamus issued an Open Challenge and Humberto Carrillo accepted once agin. They fight before the bell could ring. Humberto took out Sheamus this time.

– MVP said WWE Champion Bobby Lashley felt disrespected for not being consulted about Braun Strowman potentially being added to the WWE Title match at WrestleMania Backlash.

Lashley said he will be watching their match up close, and will walk out of WrestleMania Backlash still the WWE Champion.

– Randy Orton said Riddle kind of earned his respect last week, and wants to give their Tag Team “RK-BRO” a chance tonight.