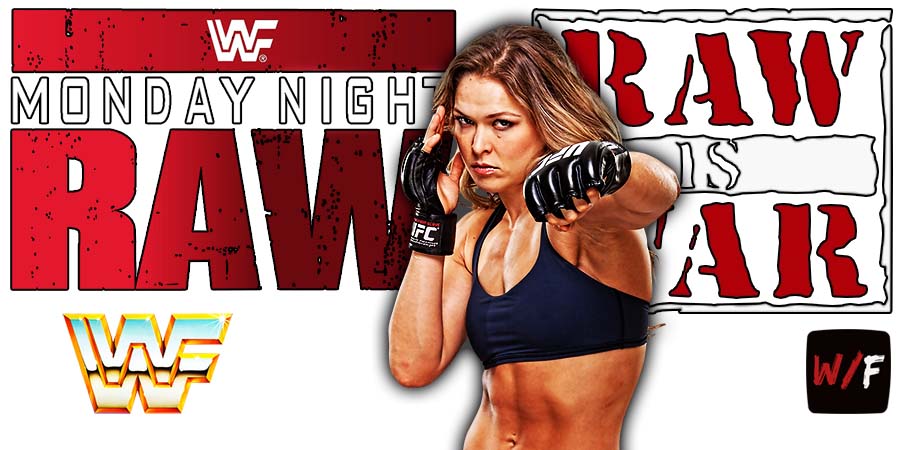 The new WWE Champion Bobby Lashley and MVP then came out and The All Mighty bragged about pinning The Beast.

Brock Lesnar then came out in his ring gear and said he isn’t mad at Lashley, he’s mad at Roman Reigns and Paul Heyman.

Brock then challenged Bobby to a Title rematch right now, but MVP declined. Lesnar called Lashley chicken sh*t and Lashley got angry, but MVP held him back.

Pearce then announced that Lesnar will be one of the participants in the WWE Championship Elimination Chamber match.

– Alexa Bliss went back to Therapy. The Therapist gave Alexa a replica of Lily.

– On The Kevin Owens Show, Owens told Seth Rollins that he is the Universal Champion of his heart. Seth said he has major news and it’s that he has been added to the Elimination Chamber Match after his performance at the Royal Rumble.

– Women’s Royal Rumble 2022 winner Ronda Rousey came out and talked about who she will face at WrestleMania 38.

😲😲😲😲
😲😲😲😲
😲😲😲😲#WWERaw Women's Champion @BeckyLynchWWE gets a message from @RondaRousey! pic.twitter.com/hAftMAK85o

After this, Ronda left and WWE Hall Of Famer Lita came out. Lita praised Becky and Becky said he has been a fan of Lita for a long time and even got in trouble once for wearing a thong in the way Lita did.

Lita said Becky doesn’t back down from any challenge, and Becky agreed, which resulted in Lita challenging Becky to a RAW Women’s Championship match at the Elimination Chamber 2022 premium live event in Saudi Arabia on February 19.

Becky was forced to accept this challenge and the match is on!

This episode was pre-taped at the Baltimore Arena in Baltimore, Maryland and featured matches & storyline segments on the road to the ‘WCW SuperBrawl Revenge’ PPV.