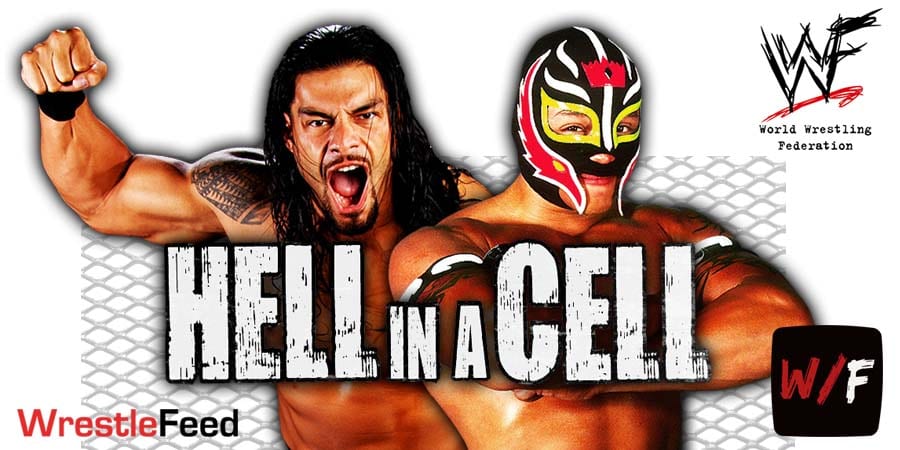 – SmackDown kicked off with Rey Mysterio cutting a promo in the ring. Rey said Dominik is lucky to be able to walk after Roman Reigns powerbombed him last week, and called out Roman to the ring.

Roman & Paul Heyman come out. Roman said it wasn’t his fault. Roman said what he did to Dominik was PG compared to what he will do to Rey if he goes through with the match. Rey doesn’t back down so the match is still on.

– Kevin Owens went to Adam Pearce & Sonya Deville and asked for a rematch against Sami Zayn. Pearce made the match official for this Sunday’s Hell In A Cell 2021 PPV.

– Shinsuke Nakamura def. King Corbin (Nakamura gets to keep the crown and is now King Nakamura)

– SmackDown Women’s Champion Bianca Belair & Bayley come face-to-face before the Hell In A Cell PPV. Bianca said she wants their match to be a Hell in a Cell match. They brawled and Bayley stood tall.

– Jimmy Uso said he thought about what Roman Reigns said about representing the family and being the best. Jimmy said that he might not agree with everything Roman says, but admits he is right and said they are family.

Jimmy claimed that he has not heard from Jey Uso in the last week, then told Roman that if he needs his help he will be there for him. Roman said he does not need help and told him that they both need Jey, as they are at their best when all three of them are together.

– Otis was scheduled to face Angelo Dawkins, but Otis and Chad Gable attacked Dawkins before the bell rang.

– Seth Rollins vs. Cesaro rematch has been made official for the Hell In A Cell PPV.

Also Read: Real Reason Why Universal Title Hell In A Cell Match Was Moved To SmackDown

Highlights Of The Recent Feud Between Bret Hart And Jerry Lawler

The Smoking Gunns vs. The Brooklyn Brawler/Doug Stahl

King Of The Ring Report