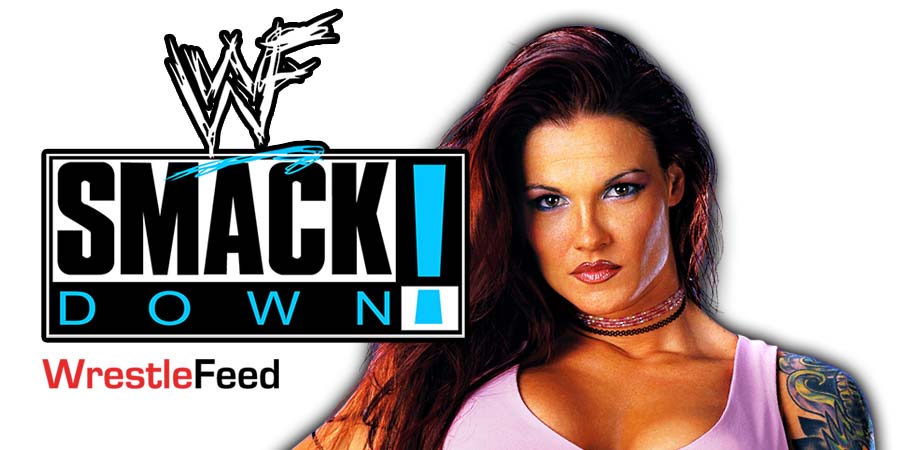 – Tonight’s SmackDown kicked off with The Usos announcing that there will be a Fatal 4 Way Match to determine their next challengers for the SmackDown Tag Team Championship.

– Naomi went to Sonya Deville and asked what she has against her. Sonya said Naomi showed up with main character vibes when everyone knows she is just an extra, and threatened to fine her, fire her, or remove her from the Women’s Royal Rumble match.

– Sami Zayn declared his entry into the Men’s Royal Rumble 2022 Match. Sami said anything Johnny Knoxville can do, he can do it better and wanted to prove it with his stunt show InZayn. Sami got in a shopping cart, but got scared and decided not to do it. Intercontinental Champion Shinsuke Nakamura & Rick Boogs came out and took out Sami.

– Alyah def. Natalya with a Roll Up in just 3.17 seconds, making it the fastest victory in WWE history (and also the shortest match ever)

– WWE Hall Of Famer Lita said she has one run left in her and wants to win the 2022 Women’s Royal Rumble match, and go onto to challenge for a Title at WrestleMania 38.

SmackDown Women’s Champion Charlotte Flair interrupted. Charlotte questioned how will Lita deal with the humiliation after she loses to her at the Royal Rumble.

Lita said Charlotte has a giant head. Charlotte pointed out she already defeated Lita’s best friend Trish Stratus and retired her, and claimed she will do the same to her.

Charlotte tried to slap Lita, but Lita took her out with a Twist of Fate.

– Kofi Kingston said King Xavier Woods is injured and will miss the Royal Rumble, but declared he will enter the match. Happy Corbin & Madcap Moss interrupted. Corbin declared his entry and vowed to eliminate Kofi.

Roman claimed he’s the greatest Universal Champion. Rollins said he has to hold Roman’s hand and carry him in their Shield days and claimed he created him and can destroy him.

Roman said Rollins looks like a clown and isn’t even the best in his household, and if it was up to Roman he would be facing Rollins’ wife (Becky Lynch) at the Royal Rumble.

The Usos came out, but Rollins got out of dodge before they could attack him.

“I created you and I can destroy you.” @WWERollins has some strong words for @WWERomanReigns #SmackDown pic.twitter.com/fPHp6nO5r0