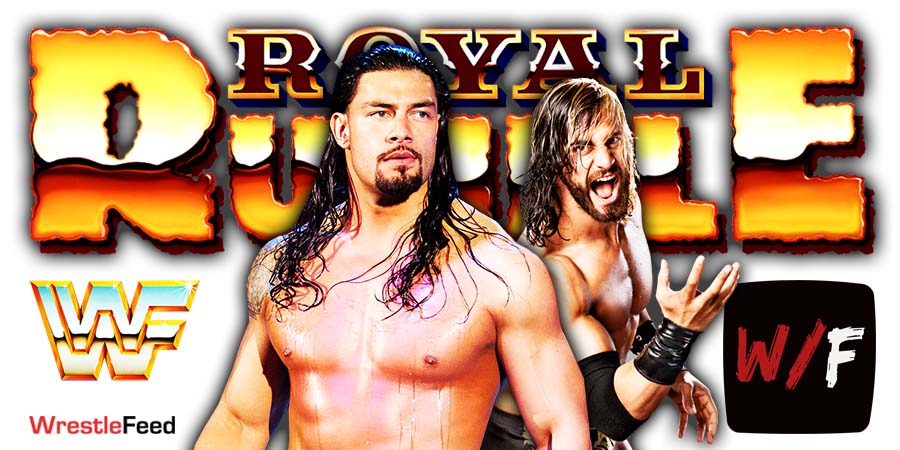 Shayna Baszler, Aliyah, Natalya and Shotzi came out and all of them claimed they will win. Charlotte said none of them have what it takes to win.

Sasha Banks then returned and she will be in the Royal Rumble too. A brawl broke out between all women.

– In the main event segment, Universal Champion Roman Reigns and Seth Rollins met face-to-face before their Title match tomorrow night. Rollins said he played Reigns like a fiddle last week and got The Usos banned from ringside at Royal Rumble.

Roman said it was an easy decision when he had to choose between his family getting embarrassed by being pinned by Rollins or punching Rollins in the mouth.

Rollins said if losing to him is an embarrassment, then Roman has embarrassed his family more than The Usos because Roman has lost to Seth in 2 big title matches in the past (WrestleMania 31 and Money In The Bank 2016).

Seth reminded Roman how The Tribal Chief is the greatest of this generation, but he has never defeated him when it matters the most.

Reigns then said Rollins is living in the past, it’s 2022 and he equals God Mode now. He then remembered Seth breaking up The Shield and said he hates him. Seth then laughed at Reigns and said Reigns is a joke, The Usos are a joke, The Bloodline is a joke, his Title reign is a joke and his family is a joke too.

Roman got angry and pushed Seth away. As Reigns was leaving the ring, he turned around and tried to hit Rollins with a Superman Punch from behind, but Rollins ducked and left the ring while laughing to end the show.

Also Read: “Miz is one of the greatest professional wrestlers of all time” – Top AEW Star

This episode was pre-taped at the Market Square Arena in Indianapolis, Indiana and featured matches & storyline segments on the road to the ‘WCW SuperBrawl IX’ PPV.