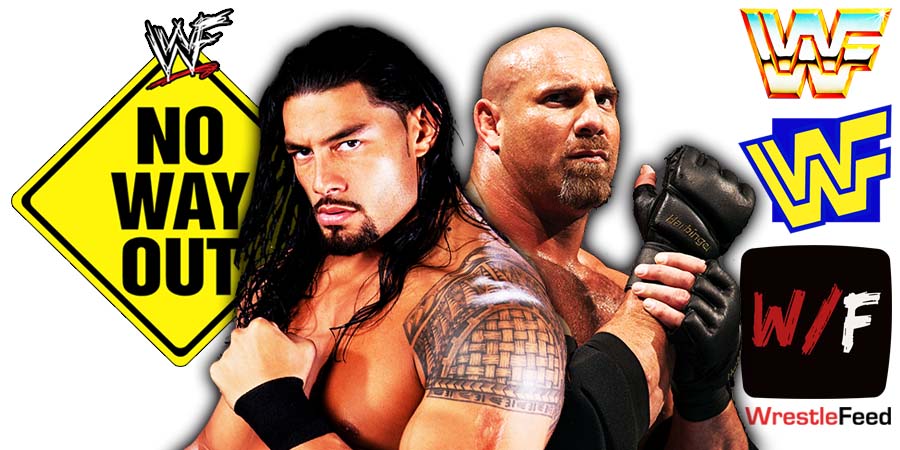 – In the opening segment of tonight’s SmackDown, Sonya Deville announced that Ronda Rousey will face consequences for attacking her last week and has a petition to suspend Ronda and wants a $100,000 fine against her.

Adam Pearce came out and read a message from Vince McMahon. Pearce said Sonya has been abusing her power and her petition has been declined. Pearce said if Sonya ignores the warning or lays a hand on Naomi, her job will be in serious jeopardy.

– SmackDown Tag Team Champions The Usos attacked The Viking Raiders backstage and they stole their helmets.

– In a backstage interview with Michael Cole, Universal Champion Roman Reigns said that 2 years ago Goldberg would’ve had a shot against him, but the WWE Hall Of Famer stands no chance against him today.

Roman then vowed he will ‘GOLDBERG’ Goldberg at Elimination Chamber.

Two years in the making… @WWERomanReigns is VERY confident going into #WWEChamber against @Goldberg. #SmackDown pic.twitter.com/rFewWtQB0r

– Natalya def. Aliyah in a Dungeon Style match (Natalya continued to attack Aliyah after the match and Xia Li made the save)

– Sami Zayn rigged a Microphone to electrocute Rick Boogs during an In-Zayn segment.

– Drew McIntyre announced that his match against Madcap Moss will now be a Falls Count Anywhere Match and threatened to stab Moss with his Sword at Elimination Chamber.

– In a backstage interview with Michael Cole, Goldberg said his match against Roman Reigns has been a long time coming. Goldberg said Roman is his next victim and after he destroys Roman, Roman will be forced to acknowledge him and he will walk into WrestleMania 38 as the Universal Champion and he will face off against his old rival Brock Lesnar once again.

– The Iron Sheik vs. Ken Jugan