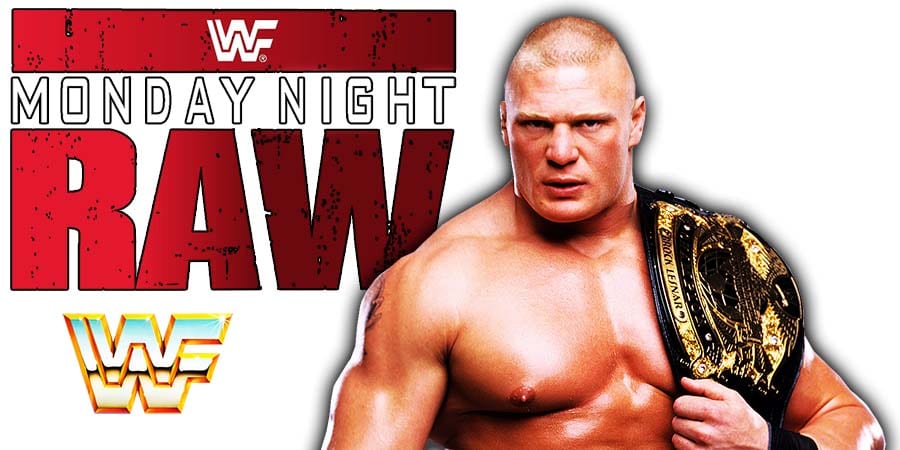 Lesnar said the WWE Title and the Universal Title will get married and have a baby, and he will get full custody of that baby this Sunday at WrestleMania 38, as he will be crowned the Undisputed WWE Universal Champion.

– The Miz introduced Lucha Logan and it’s Logan Paul wearing Rey Mysterio’s mask, which was stolen by Miz last week on RAW. The Mysterios came out and attacked them.

– Rey Mysterio def. The Miz (After the match, Rey snatched his mask back from Logan and The Mysterios took out Miz)

– Omos def. The Viking Raiders in a 1-on-2 Handicap Match via Count-Out (Omos clotheslined Erik’s head off and he couldn’t return to the ring)

– Omos got interviewed after the match and he’s looking for a WrestleMania 38 opponent. Former 2-time WWE Champion Bobby Lashley then returned and Omos is happy. Lashley gets a new pyro entrance.

Omos shoved Lashley away and then pushed him into another corner. Lashley finally took him down with a 3rd shoulder tackle.

Fans are chanting for Bobby, as he’s a babyface now. Both men point to the WrestleMania 38 sign and this match has been made official for the Show Of Shows.

– The Bloodline came out next. Universal Champion Roman Reigns told the fans to stop chanting “WHAT!?” at him or he will smash all of them, just like he would smash Stone Cold Steve Austin.

Reigns recalled Brock Lesnar busting him open at WrestleMania 34 in 2018. All of his family was left disappointed with him after that and began doubting him. His wife wanted him to quit WWE.

Roman said he has done everything in his business, except beating The Beast at WrestleMania.

The Tribal Chief said this is personal for him. He has already taken away Paul Heyman from Brock, and turned ‘The Advocate’ into ‘The Wise Man’, and on Sunday he will take away the WWE Championship from Brock as well.

*Go to the NEXT page to continue reading WrestleMania RAW results