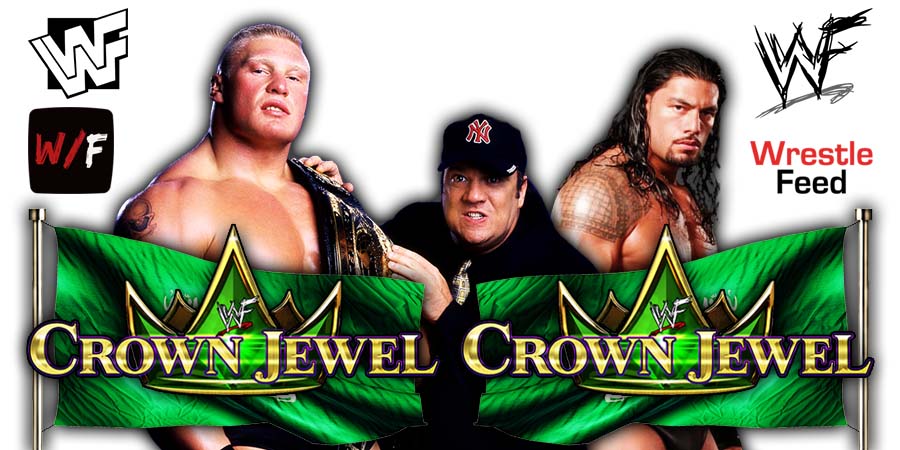 Up next is the main event of the evening, and it is for the Universal Championship.

“The Tribal Chief” Roman Reign, who has been the Universal Champion for over 400 days, makes his way out first to a huge reaction from the fans in Saudi Arabia. Paul Heyman is with him, but The Usos are not.

There a pyro malfunction during Roman’s entrance. One side of the pyro on stage didn’t go off.

Out next is the longest Universal Champion of all time, Brock Lesnar! The Beast got a huge pop from the crowd as well.

The match begins and Brock begins punching Roman. Brock goes for the German Suplex, but Reigns blocks it by holding the ring rope. However, Lesnar gets his way and suplexes Reigns.

Reigns sends Brock face-first into the ring post on the outside.

Fans are chanting “Let’s go Roman – Suplex City”. Reigns delivers a Superman Punch to Lesnar, and Lesnar fell to the floor from the apron.

Reigns then hit an over the top rope dive on Lesnar! Reigns hits a Spear on Lesnar in the ring and goes for the cover, but Lesnar kicks out.

Reigns hits 2 Superman Punches to Lesnar and went for the Spear, but Lesnar jumped up and Roman went face-first into the turnbuckle.

Lesnar hits 3 German Suplexes on Reigns and then hits the F5! Lesnar goes for the cover, but Roman kicks out!

Brock goes for another F5, but Reigns counters and locks in the Guillotine Chokehold! Lesnar breaks the hold by hitting a Spinebuster!

Lesnar hits an F5 on Roman and Reigns falls on the referee, and there’s no one to count the pinfall.

Brock picks up the referee with one hand and throws him out of the ring. Reigns hits a Spear!

Heyman throws the Universal Title in between Lesnar & Reigns, and they both grab it and Lesnar pulls it. The Usos come in and superkicked Lesnar.

Reigns hits Lesnar with the Title belt and pins him to pick up the win!