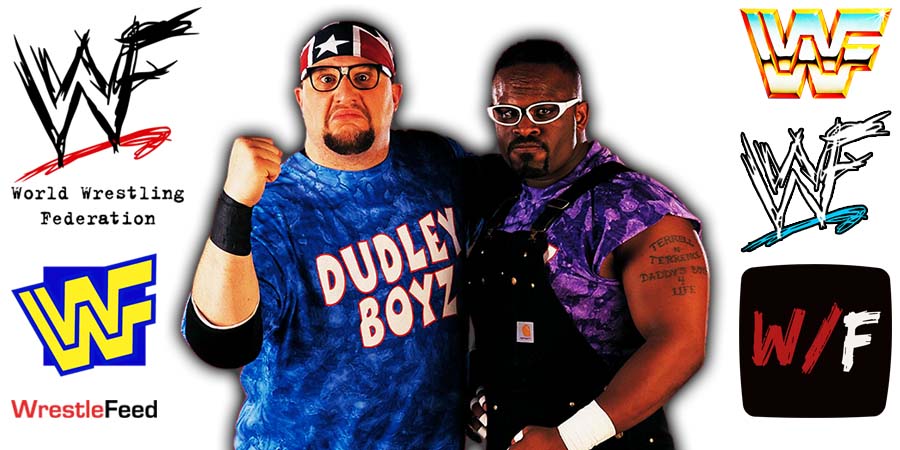 • D-Von Dudley Not Telling The Truth About Dudley Boyz Break-Up?

During a recent appearance on the The Cut Pro Wrestling Podcast, WWE Hall Of Famer D-Von Dudley explained why he doesn’t do business anymore with his longtime tag team partner Bubba Ray Dudley (tap here to read in detail).

He revealed that Bubba didn’t feel WWE treated The Dudley Boyz fairly during their 2015-2016 run, and didn’t want to sign a new contract in 2016, but D-Von wanted to.

Bubba wanted another Tag Team Title run for them, but D-Von noted that this wasn’t the Attitude Era anymore, and that he was back in the WWE to end his career the right way – by putting over younger wrestlers.

Bubba eventually decided to sign a new contract in 2016, but WWE wasn’t interested anymore, as Bubba left a “bad taste in their mouth”.

D-Von wanted to continue as a singles wrestler in WWE, but Vince McMahon wanted The Dudley Boyz only, so this resulted in D-Von’s in-ring career coming to an end, and he now works as a backstage producer in the company.

This difference of opinions at that time resulted in them going their separate ways.

After reading what D-Von said, TNA Veteran Velvet Sky (who is engaged to Bubba) tweeted the following (but later deleted it):

“Fiction can be fun…lol if ya’ll only knew the truth. Cuz this ain’t it.”

The Berzerker vs. Bill Pierce

The Legion Of Doom vs. Mike Williams & Mike Gunn

The Warlord vs. Mike Fury (Big Guido in ECW)

The Barbarian vs. Ray Garcia