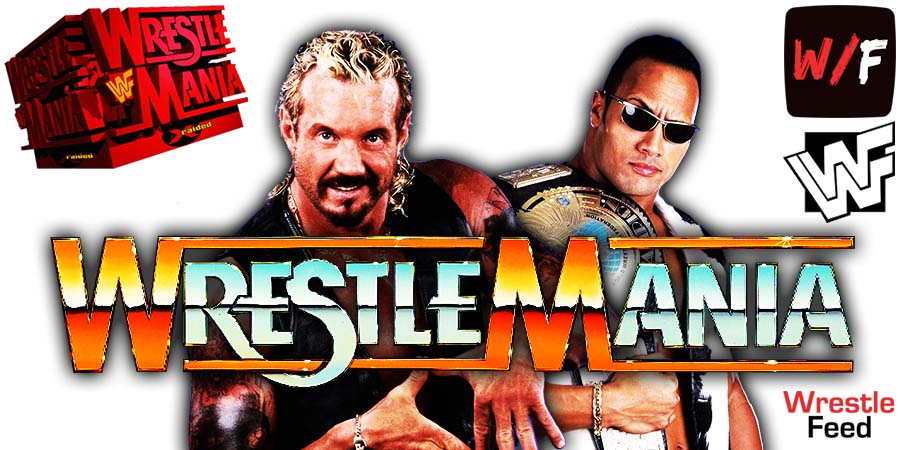 During a recent episode of his and Jake Roberts’ DDP Snake Pit podcast, Diamond Dallas Page recalled meeting The Rock for the first time, which was backstage at WrestleMania X8 in 2002.

DDP used to call himself the People’s Champion in WCW, before The Rock started using that nickname, and that’s what they ended up talking about in that encounter backstage.

We go in there, we go in the locker room, and Big Show, and those ones in Canada, where the Skydome is, you know they’re huge, huge locker room. And no one is there and Big Show goes, ‘Rock, you still here?’ ‘Yeah, I’m in the shower’. He goes, ‘good, I’ve got a huge mark dying to meet you.’”

And now I’m leaving and I’m almost to the door, and all of a sudden I hear, ‘Hey Diamond’. And Big Show moves out of the way and I can see The Rock, you know he’s got that mullet, sideburns, he’s putting on one of his $1,500 Versace shirts. I can see him rolling in character, right?

He goes, ‘You know Diamond, there’s only one People’s Champion’. And Big Show’s like, ‘Ohhhh’, and I just deadpanned him and go, ‘You know Rock, you’re right. And you – well, you’re looking at him.’”

He joined the World Wrestling Federation in 1986 as King Tonga, but was soon renamed Haku and put into a Tag Team with Tama, called “The Islanders”.

Haku wrestled for the WWF until early 1992, before he signed a contract with Ted Turner’s World Championship Wrestling in 1994 and worked for the promotion under the name “Meng”, till he returned to the WWF in January 2001 for one last run, that only lasted a few months.

He’s still considered one of the toughest pro wrestlers of all time, some even argue that he’s the most bad ass tough guy ever in wrestling history.