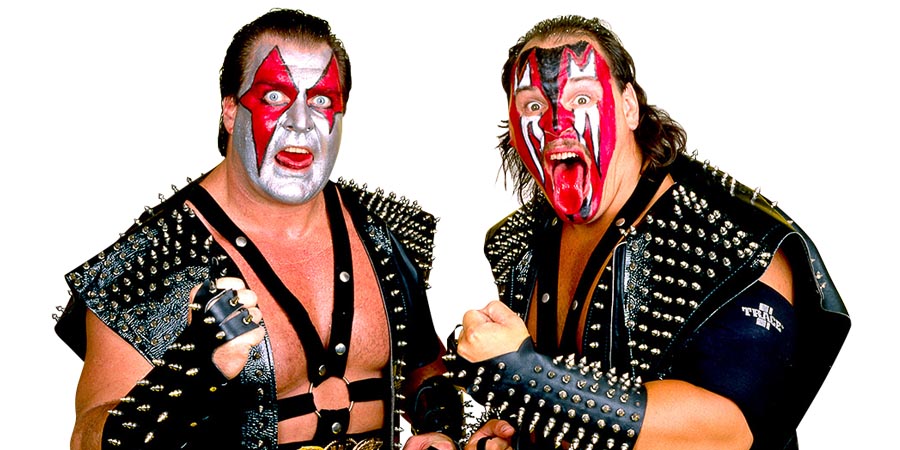 LeRoux can be referred to as a ‘WCW original’, as he was trained in the WCW Power Plant, World Championship Wrestling’s very own pro wrestling school, similar to what the WWE’s Performance Center is nowadays.

Lash wrestled on WCW TV from 1998 till the company was bought by Vince McMahon in march 2001.

On working with some of the greatest tag teams of all time:

Smash: “We’re lucky enough to wrestle the greatest tag teams ever and now that we’re a little bit older, you look back at some of the matches we had and everything, we were very lucky to be able to work with those guys. It was a great life

When people come up to you and say, ‘Hey, I remember that match at the Sky Dome!’ It makes you feel good because they felt good.”

Ax: “It wasn’t a job, it was getting paid to go out, and perform, and have fun, and you have fond memories. You try to pick out one or two and it’s just impossible.”

On if they were a copy of The Legion Of Doom:

Ax: “[They’re] good friends of ours. It’s sad about Hawk [passing], but we see Animal around these events quite often.”

Smash: “I don’t think we were [a copy]. We looked different, we wrestled different than they were.

They were a great tag team, and like Ax was saying, very good friends of ours. We do miss Hawk a lot, too.”

On a possible WWE Hall of Fame induction:

Ax: “We just have to figure out – we have to make enough money to buy a ticket. We can’t get in without buying a ticket.”