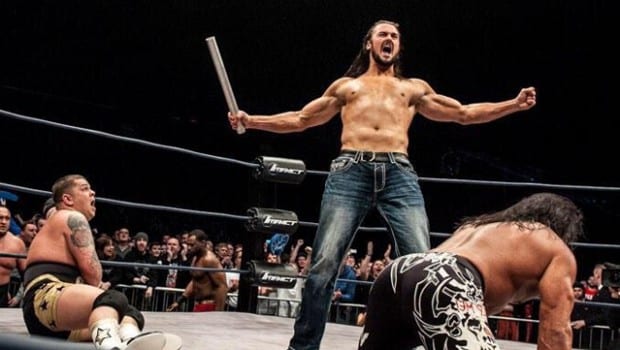 In a recent interview with Ring Rust Radio, Drew Galloway (f.k.a Drew McIntyre in WWE) revealed why he joined TNA, becoming a babyface immediately after joining TNA and more. Below are a few highlights:

Joining TNA and long term goals with the company:

“The process involved obviously talking with the bosses over there. I was over in Scotland for a show, for a Scottish company ICW. I spoke with them and initially I was a little apprehensive. I wasn’t looking to get back on American TV so quickly to be honest. I spoke with the bosses there and they told me the plan and I got excited about. With Destination America deal and the opportunity to be a part of something on the ground floor and try to build it up, and the opportunity to just be myself. Anything you see on TNA is me, that’s Drew Galloway 100%. I’m talking as Drew Galloway, I’m wrestling as Drew Galloway, and it’s no gimmicks. I get to just be a wrestler and be myself. I’m getting the opportunity to do that with TNA and I couldn’t be any happier right now.”

Becoming one of the most popular babyfaces in TNA and what’s his preference: babyface or heel?

“Honestly I don’t have a preference, I just kind of do my thing. If you notice the way I wrestle, I do wrestle more like a heel even when I’m a face. I just have a particular style like I’m a hybrid European/American with a little bit of strong style in there. Honestly I don’t have a preference. I legit wrestle how I wrestle. If the fans are on board their going to cheer, and if they aren’t digging it they are going to boo. Either way I am having fun. It’s weird to be cheered to be honest, I’m just used to being the bad guy. The fans are digging what I am saying because everything I say is me, it’s not scripted. It’s Drew Galloway speaking his mind and they feel the same way if they are getting behind it. I want to say thank you to them for loving wrestling as much as I do.”