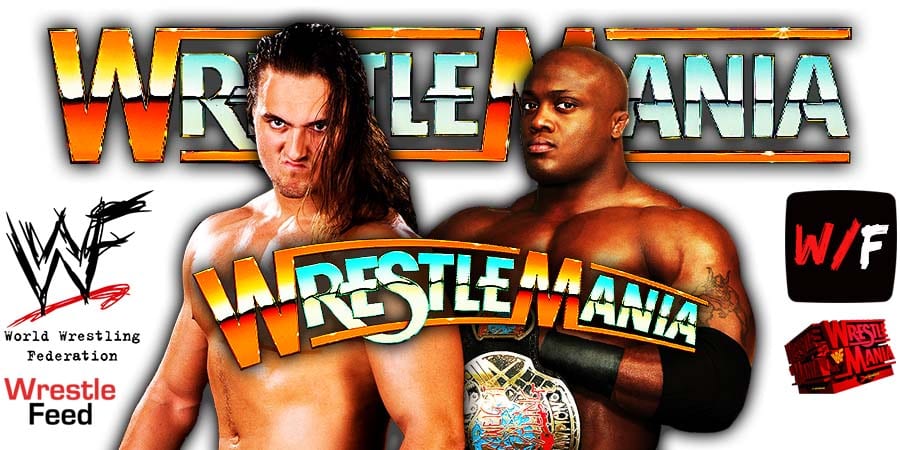 • Drew McIntyre On Rumors Of Him Opening WrestleMania 37

Many people believed that the WWE Championship match will be the main event of Night 1, but that’s not the case.

With that being said, it is possible that the WWE Championship match between Lashley and McIntyre now kicks off Night 1, as WrestleVotes reported yesterday that WWE officials are talking about the Kickoff Show on Night 1 to feature no matches, as they want the first entrance in front of fans on the main show as it will be a big deal.

“Hearing something interesting – WWE may not feature a match on the WrestleMania kickoff show for night 1, as the 1st entrance back in front of fans is being looked at as a HUGE deal. Not decided at all, but definitely a conversation happening within creative.”

McIntyre being in the first match in front of actual fans in attendance in over a year will be the perfect way to kick off WrestleMania 37, since he closed last year’s WrestleMania with the biggest moment of his career – which happened in front of 0 fans (when he defeated Brock Lesnar for the WWE Championship in the main event of Night 2 of WrestleMania 36).

During an interview with Wrasslinews, McIntyre was asked about the rumor of opening WrestleMania 37 and here’s what he said:

“I would be happy opening the show or closing the show. This year is so unique in the sense that the last match — every match at WrestleMania is a main event. Let’s be realistic, if you’re on WrestleMania, you’re in a main event, but when you’re fighting for the championship, generally it’s cool to close the show.

This is such a unique WrestleMania, without having the fans there for an entire year, that first reaction is gonna be so so special.

So that’s why I said if I finish last, the last match — that’s phenomenal! That’s fantastic! That’s tradition! But if I’m in the opening match it’s just as big because if you get to walk out in that first match and get the crowd full of energy and all those pent-up reactions that we’ve been keeping inside for a year, that’s gonna be special too, so, either way I’m happy!”