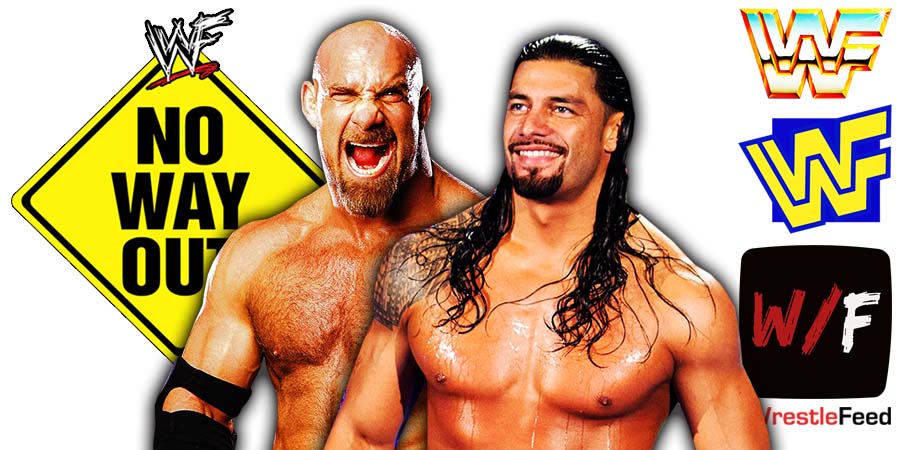 This is the 12th event under the Elimination Chamber banner and the final premium live event before WrestleMania 38.

On the Kickoff Show, Mysterio defeated Miz. Miz attacked Rey after the match, but Rey & Dominik Mysterio took out The A-Lister.

The main show begins with the Universal Championship match, a match that was originally scheduled to take place at WrestleMania 36 in 2020.

The longest World Champion of the last 35 years makes his way out first – “The Tribal Chief” Roman Reigns.

Roman took the mic and told The Kingdom of Saudi Arabia to acknowledge him and they did.

WWE Hall Of Famer Goldberg made his way out next and he came out directly to the pyro. His backstage walk wasn’t shown.

Roman raises the Title in front of Goldberg and the match begins. Fans are chanting for Goldberg and The Head Of The Table isn’t happy.

They lock up and Roman breaks it up with a punch to the head. Roman sends Goldberg out of the ring.

Roman is bouncing Goldberg’s head on the announce table and then Goldberg Irish Whips Roman into the barricade.

The action returns to the ring and Roman is punishing The Icon. Roman comes running and Goldberg spears him!

Goldberg goes for the Jackhammer, but Roman counters and hits the Urinage / Rock Bottom.

Roman hits a vicious Superman Punch! Roman goes for the Spear, but Goldberg hits him with a Spear instead!!

Goldberg goes for the Jackhammer, but Roman counters and locks in the Guillotine! Goldberg is trying to break it up, but Roman isn’t allowing it and he chokes him out!

Roman Reigns chokes out Goldberg with the Guillotine to retain the Universal Championship. Roman didn't let Goldberg hit him with a Jackhammer during the match.#WWEChamber pic.twitter.com/0VA5bNBb1E