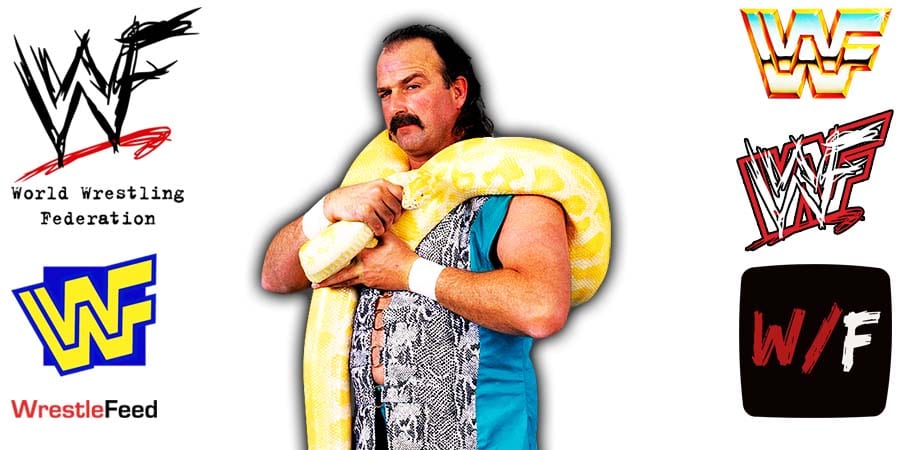 On a recent episode of his weekly ’83 Weeks’ podcast, Eric Bischoff talked about WWF Legend Jake ‘The Snake’ Roberts and never signing him to World Championship Wrestling during the Monday Night Wars.

Jake did wrestle for Ted Turner’s WCW in 1992, but that was before Bischoff was in charge.

Here’s the former WCW President’s explanation on why he never signed Jake:

“I think the consensus among the people that knew Jake best is indeed he had and has a really good mind for storytelling and characters but he was too far gone at that point, he was not in control. Everybody respected the hell out of him and everybody would’ve loved to have Jake on their team, especially in creative capacity.

I think the people closest to him, like DDP, acknowledged that he wasn’t in the right frame of mind to be involved. I see Jake whenever we go down to AEW, once every couple of months and make an appearance.

Before I leave I’m always like I’ve got to sit down, buy Jake dinner, just go away from the hotel, get away from everybody else and I just want to pick his brain. Get inside that head of his and see just how deep he goes and hear what he thinks in terms of what we’re seeing today and how to hold onto some of the formulas and presentation that has worked since the beginning of time but yet still balance that with what the audience has as far as expectations with athleticism.

There’s got to be a balance in there somewhere, right now for me, the emphasis is way too much on freestyle gymnastic floor exercise and not enough on storytelling in the ring and the physicality in the ring. I’d love to hear how Jake would approach it if he were calling the shots.

One of these days, I’ll get that opportunity but I haven’t done so yet.”

It was broadcasted from the Ice Palace in Tampa, Florida and featured matches, interviews & storyline segments on the road to the ‘WCW Bash at the Beach 1998’ PPV.