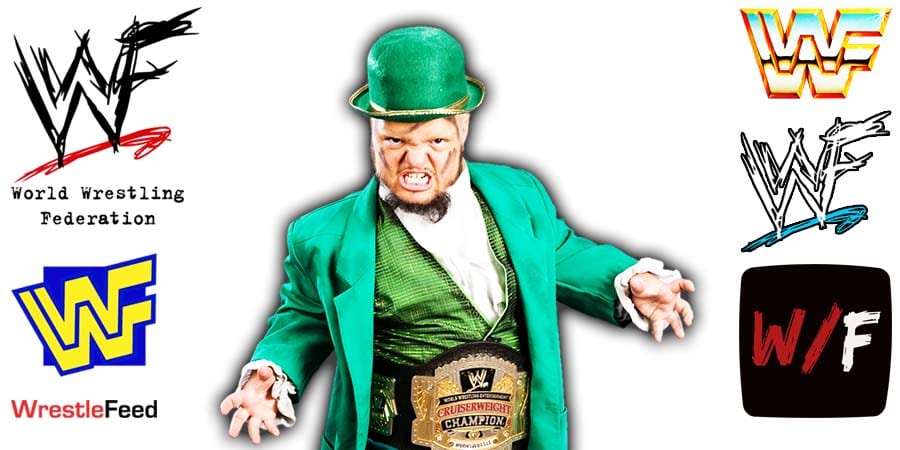 • Finlay Tried To Sell Hornswoggle To A Cannibal

During a recent appearance on Stories With Brisco and Bradshaw, WCW/WWE Veteran Fit Finlay revealed an old road story about him trying to sell his midget sidekick Hornswoggle to a man in the Philippines, who appeared to be some sort of a cannibal or something similar.

Here’s what the Irish Legend had to say about the incident:

“So we’re in the lobby of the hotel in the Philippines somewhere. I see the guy looking at Swoggle like he’s looking at a meal. And I go, ‘hey, you want to buy him?’.

So I’ve got Swoggle by his collar and I’m holding on while this guy and myself we’re talking money, we’re going how much?

While Swoggle’s looking up and me, like, ‘Wait, no, what are you doing?’ ‘I’m going to sell you it’ll be alright I’ll get you back’.

The guy is talking serious money here, and I’m pushing them towards and pushing Swoggle towards the guy.

The more serious of this was like 15-minute conversation.

And Hornswoggle is sweating his nuts off because he thinks I’m going to sell him, I would have done it if the money was right.”

Finlay had Hornswoggle with him at ringside between 2006 and 2008, and they were most famously involved in a storyline about Swoggle being revealed as Vince McMahon’s illegitimate son.

Also Read: Hornswoggle Reveals How The Undertaker Reacted When He Fell Asleep During Their Segment

• Old School WCW/WWF Veteran’s Birthday Would Have Been Today

Today would have been the 54th birthday of Old School WCW/WWF Veteran “The Crippler” Chris Benoit.

In late 1995, Benoit signed an exclusive deal with WCW, so he worked for them until leaving the promotion in early 2000 to jump ship to the World Wrestling Federation, alongside his close personal friends Eddie Guerrero, Dean Malenko & Perry Saturn.