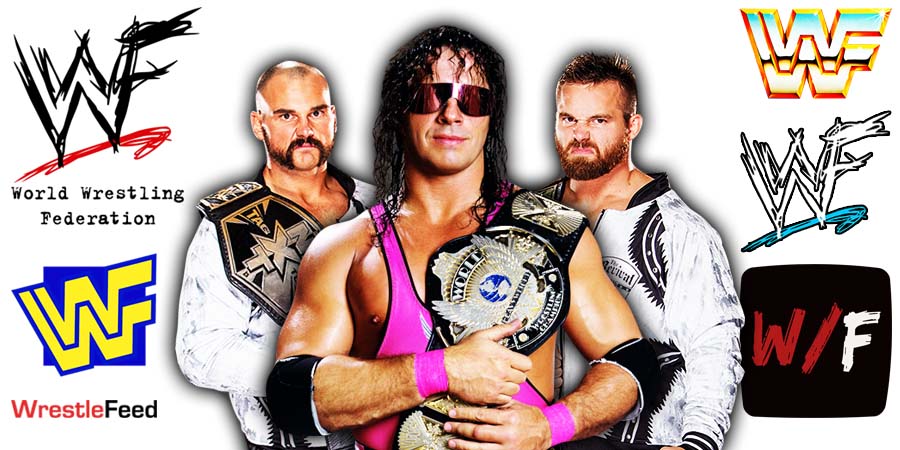 During a recent interview on Barstool Rasslin’, former AEW World Tag Team Champions FTR (Dax Harwood & Cash Wheeler, fka The Revival in WWE) talked about Bret Hart managing him at an upcoming indy event and The Hitman not being able to manage them in All Elite Wrestling (word going on is that Bret signed a new Legends deal with WWE).

Dax: I just think people can resonate with admiration for their heroes. Obviously, there’s nobody on the planet Earth who has more admiration for Bret Hart than I do because personally, without him even knowing it, he’s done a lot of sh*t for me.

We do get an opportunity to work with him on June the 10th in Massachusetts.

He’s going to be our manager against the Sons of the Horsemen, Brian Pillman Jr. and Brock Anderson with Arn Anderson in their corner. That’s going to be a pretty special night.

Cash: Those are cooler for me. I would love obviously for Bret to be here and to do all that, but I would rather do one night stuff like we’re doing with Bret. Foley this weekend is going to be walking to the ring with us.

Dennis Condrey will do that the night after Bret. Those are cooler for me because it’s one night. We get to pay respect. We get to be out there with these guys.

But as far as AEW right now full time, I’m happy it just being me and Dax and doing our thing. We had a manager for a long time, and now that we don’t, I’m okay with it just being the two of us and running and seeing what happens for the time being.

After doing jobs on WWF TV in 1993, he eventually ended up as one member of the Tag Team ‘The Headbangers’.

Together they even held the Tag Team Title for a month in 1997, before Mosh turned into “Beaver Cleavage” and then “Chaz”.

The Headbangers made a return to WWE TV in 2016, when they were used on the SmackDown! brand to spice up their tag team division with a little “OLD SCHOOL” feeling, but WWE creative once again failed with their booking decisions and removed them from the roster after just a few weeks.