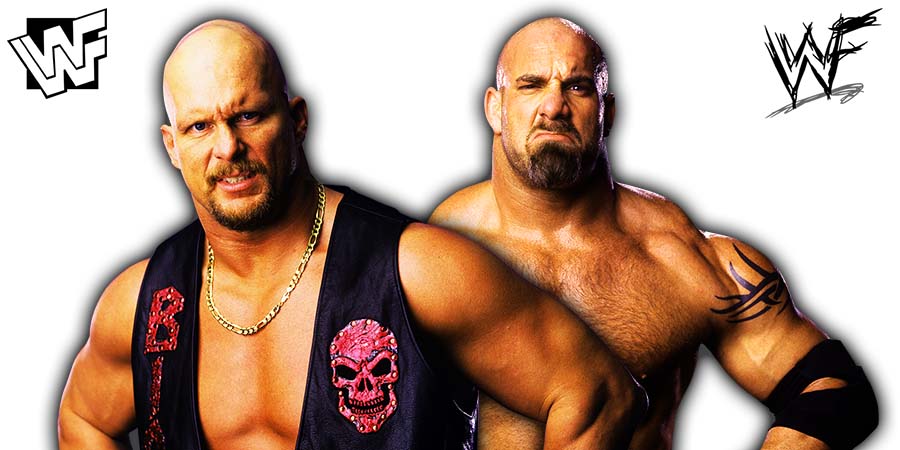 Old School WCW Legend Bill Goldberg was recently interviewed on an episode of the Roman Atwood podcast, where he spoke about several topics, including his first WWE run (2003-2004).

The former World Heavyweight Champion revealed that he broke his hand backstage before his segment with Stone Cold Steve Austin.

“Stephanie (McMahon) came up to me backstage one night and said, ‘I heard you’ve been headbutting the doors.’ I’m like, ‘Yeah, that’s how I’ve got to be me.’ She goes, ‘I don’t want you headbutting doors anymore.’

I wanted to make sure that I was following her orders, they knock on my door. Wham! I punch the door and broke my hand. I never told them about it. So then, what am I going to do? ‘Time out!’ It’s freaking live television. So, I punch the door. They’re on the other side of the door, they don’t know what’s going on.

I wear these gloves, right? So, fortunately, I grabbed my glove and pulled my hand back out so I could move it. And I go, ‘Okay, let’s go to the ring.’ So I went to the ring, I grab the rope and I fell. And it was the night Steve Austin and I met for the first time, I think, and we did the beer bash.”

A few months ago in July, Goldberg already confirmed during a New York Post interview that he’s still under a WWE contract and is waiting for them to call him about his next match.

“I’m still waiting for that one [call] to happen one of these days. But I suppose you never retire in the wrestling world until you’re dead, so who knows. Hey, I may never get the call, you never know. But you bet your a$$ I’ll be ready.”

He eventually returned in 2016 and has been used as a part-timer / special attraction ever since.