4. Satirical Website Gets Huge Criticism After They Post A Fake Story Of WWE Killing The Big Show

The Onion, which is a satrical site, recently posted a fake story of WWE killing The Big Show and it received huge criticism from fans online. You can read the fake story below:

“Last night, after determining he posed a clear threat to a young boy who had entered the steel cage, we chose to end the life of one of our wrestlers. It is a tragedy anytime something like this happens, but luckily we can say a child is alive today thanks to the swift and appropriate measures taken by our WWE staff.

While lethal force is always a last resort, the reality is that we were dealing with a very large adult—one of our strongest males. A tranquilizer could have taken five, even 10, minutes to bring down a wrestler that size, and it likely would have made him even angrier in the meantime. We simply couldn’t risk waiting any longer to act.”

Below is what The Onion posted for this story on Twitter: 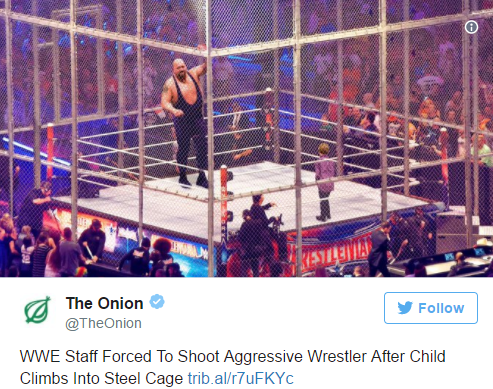