During a recent Q&A session at the MegaCon Convention, 16 time WWE World Heavyweight Champion John Cena talked about how he got into pro wrestling, what keeps him motivated after 15 years in the business, which wrestler was his inspiration & more.

On how he got into pro wrestling:

“I watched as a fan, and was a fan for all the right reasons. These were superheroes in front of me. That was their job, so I didn’t even know it was possible. It’s not like today that people can talk to me about NXT, and most people in here now know how to become a WWE Superstar, but I didn’t know, and when I found out that I can actually do it it became something that I really wanted to do because I idolized WWE.”

On what keeps him motivated after 15 years in the business:

“Perspective. Anyone in this room who has been here to listen, to be able to hear stories, but this didn’t happen overnight. I am very grateful to do what I do. I have been involved in live entertainment for 16 years now and where and what I am, I realized that I have been handed a dream. I get paid to fake fight. That is foolish, ridiculous and stupid and should never happen, but I love it, and others around me love it so much that it allows us to come together and be part of something electric and special, moving and emotional. We have all had an emotional loss in our life, and when somebody says that I don’t understand what I have meant to them, I do understand. I have great perspective. You know what keeps me motivated? Every single person out here.”

On which wrestler was his inspiration:

“As a young man, Hulk Hogan was my inspiration. Nowadays, I am inspired by so many people. I know how tough it is to be a WWE Superstar so anyone to be able to do this inspires me. Over the years I found inspiration from so many different Superstars, which is why I try to bring out the best in those Superstars because they inspire me, from Kevin Owens, Seth Rollins, AJ Styles, Dean Ambrose, Roman Reigns, the list goes on and on. Even CM Punk, Daniel Bryan, all these guys that inspired me, I try to inspire them and bring out the best in them because of what they brought out in me.”

On why him pairing with Paul Heyman would be a waste:

“Paul is an extremely valuable resource because of his knowledge. I rely on Paul a lot for his opinion, his insight behind the curtain. Paul Heyman is best with people who aren’t able to articulate with a microphone in their hands. I enjoy the negative and positive response from being so honest after 15 years of us being together as friends, partners, family, whatever you want to call it. Paul Heyman would be wasted with me, and likewise I would be wasted with Paul. Paul is a great vehicle to describe someone who can’t describe themselves, but he has a wealth of knowledge and he is someone that I definitely lean on.”

According to the Wrestling Observer, WWE is planning for Natalya to turn heel at this Sunday’s Money In The Bank 2018 PPV.

It’s no secret that Nattie has been training Ronda Rousey and that they’ve become the best of friends. Meltzer noted that Nattie is set to turn on Rousey during or after her match against Nia Jax for the RAW Women’s Championship, to set up a feud that would lead to a match at SummerSlam in August.

It should also be noted that WWE is building towards a story where Natalya is faking her injury as last week it was shown that her right knee was injured and then Natalya’s left knee was taped up on this week’s RAW.

You can check out a photo below: 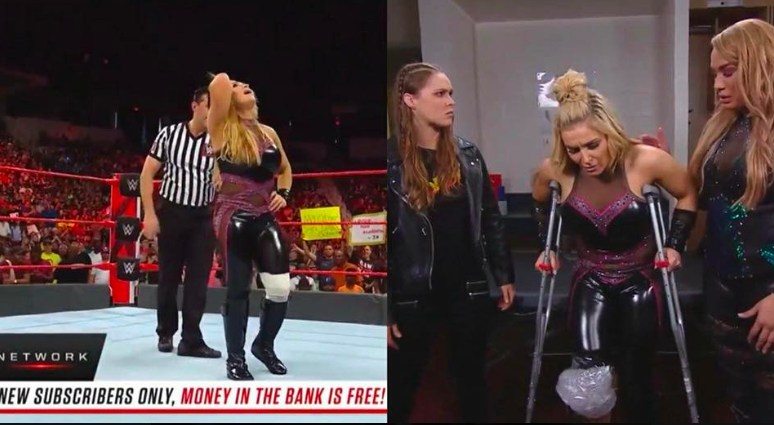