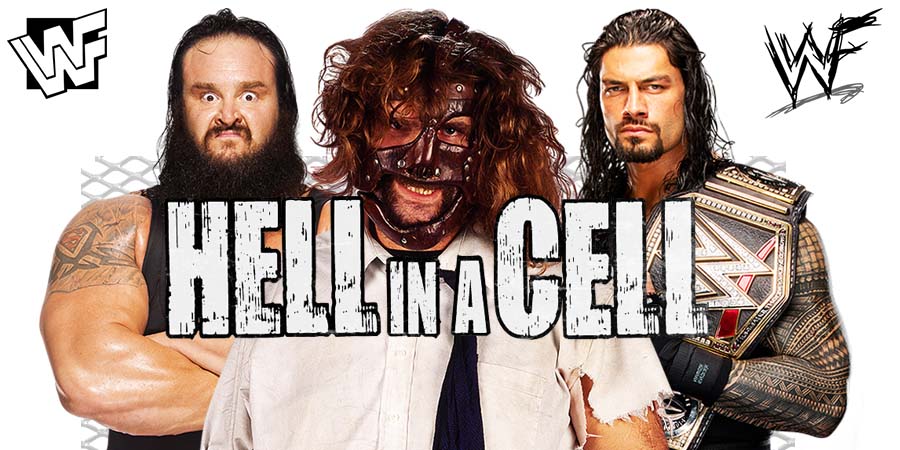 Up next is the main event of the evening – Roman Reigns vs. Braun Strowman for the Universal Championship inside Hell In A Cell with WWE Hall of Famer Mick Foley as the Special Guest Referee.

Foley makes his way out first, followed by “The Monster Among Men” and then “The Big Dog”.

Reigns comes out to a big pop. It should be noted that Reigns has never lost inside Hell in a Cell.

Reigns lifts the Universal Title during in-ring introductions, but Strowman pulls the Title away from Reigns’ grasp and poses with it.

This leads to Reigns slapping Strowman and the match begins.

Strowman is now driving Reigns into the Hell in a Cell walls. Strowman is screaming that Reigns’ boys can’t help him tonight.

Reigns hits a jumping clothesline on Strowman and this sends Strowman out of the ring. Strowman now hits Reigns with a shoulder tackle and sends Reigns straight into the Cell wall.

Reigns nails Strowman with two Drive-Bys. Strowman comes back with a Chokeslam on the apron!

Strowman takes out a Kendo Stick and a Steel Chair from underneath the ring. Reigns attacks Strowman with a Kendo Stick, but Strowman snatches it away after a few shots and breaks it in half.

Reigns now hits Strowman with a Steel Chair. Reigns goes for another swing, but Strowman catches it and throws it away.

Reigns nails a DDT on Strowman on top of a Steel Chair and goes for the pin, but Strowman immediately kicks out.

Reigns hits Strowman with two Superman Punches and goes for a third, but Strowman catches him and hits a Chokeslam.

Strowman goes for the cover and there’s a controversy that it was a 3 count. Strowman isn’t happy with Foley.

Reigns now comes running into Strowman and Strowman lifts him up and Reigns nails a Superman Punch out of nowhere! Reigns goes for the cover, but Strowman kicks out.

Reigns now brings a Table into the ring. Reigns comes running around the ring for a Spear on the outside, but Strowman slams the Steel Steps right in Reigns’ head!

Strowman hits Reigns with the Steel Steps again and goes for the cover, but Reigns kicks out.

Strowman shouts ‘why can’t you stay down you moron’! Strowman now drops the Steel Steps on Reigns’ stomach!

Strowman nails the Running Powerslam on Reigns and goes for the cover, but Reigns kicks out!

Strowman sets up a Table in the corner now and is looking to Powerslam Reigns through it, but Reigns counters, nails a couple of Superman Punches and Spears Strowman through the table! Reigns goes for the cover, but Strowman kicks out at 2.5!!!

RAW Tag Team Champions Dolph Ziggler & Drew McIntyre come out and try to enter the Cell and this leads to Ambrose & Rollins coming out and attacking them. Ziggler tries to escape, but they catch him.

Rollins & Ambrose are now clearing the announce table and McIntyre runs in and attacks the Shield brothers.

McIntyre is also climbing now. McIntyre and Ziggler are now double teaming Rollins on top of the Cell now.

Ambrose is climbing up the Cell with a Kendo Stick! Ziggler lays out Rollins with a Superkick and Ambrose comes in and attacks the tag team champs with the Kendo stick.

McIntyre & Ambrose both clothesline each other down!

Ziggler is now climbing down the Cell and so is Rollins. They are exchanging blows halfway on their way down and both of them FALL DOWN and go through the announce tables!!!

Lesnar comes out with Heyman and he orders to open the Cell. Lesnar kicks the Cell door open!!!

Lesnar enters the ring and Heyman sprayed something in the eyes of Foley.Lesnar hits Strowman & Reigns with a broken piece of table!

Lesnar nails both Strowman & Reigns with F5! Fans are chanting ‘Suplex City’. Lesnar drops Reigns on top of Strowman with an F5!

The match ends in a no-contest and Hell In A Cell 2018 goes off the air with Reigns retaining the Universal Title.

Roman Reigns (c) vs. Braun Strowman ends in a No Contest; Reigns retains the Universal Title