Today would have been the 59th birthday of Old School WWF Legend “The Beast from the East” Bam Bam Bigelow (Real name: Scott Bigelow).

The 400 lbs Legend used to move like a cruiserweight in the ring, including Dropkicks, Moonsaults, Cart Wheels and his finisher, the Diving Headbutt.

Him and Big Van Vader, who had similar bodies and moved around in a pretty similar way, are both considered THE single greatest ‘Big Men’ (chubby super heavyweights) in professional wrestling history.

Bam Bam passed away in 2007 and has yet to be inducted into the WWE Hall of Fame, which is only a question of “when”, not “if”.

One fan displayed more KKK imagery during the match between Keith Lee and Dolph Ziggler. A Hitler Salute was also displayed on one of the screens.

You can see the photos below: 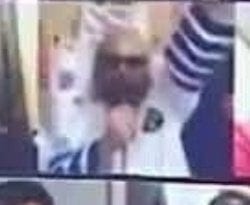 WWE has been trying to keep their trusted fans in the middle and bottom screens of the ThunderDome wall, so that they appear on TV. On the other hand, the less trusted ones are kept on top, so that they aren’t visible most of the time.

But it can be seen that WWE still has to work a lot on this as they haven’t been successful in preventing offensive imagery from being displayed.

Also Check Out: Fans Put Chris Benoit On Their Screens At WWE ThunderDome On RAW (Photos)