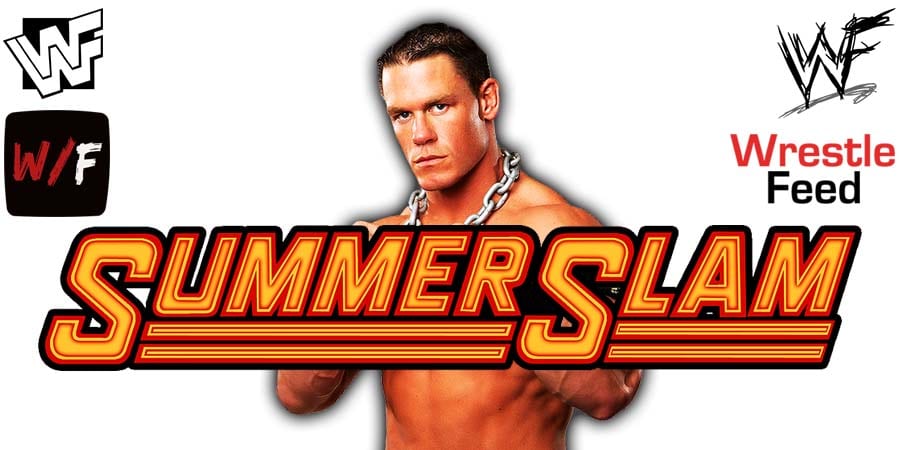 • How Long Will John Cena Stay In WWE When He Returns?

As we have reported before, the following matches are being rumored for next month’s SummerSlam 2021 pay-per-view:

– Roman Reigns (c) vs. John Cena for the Universal Championship

– Bobby Lashley (c) vs. Brock Lesnar OR Goldberg for the WWE Championship

Variety is reporting that Cena will be a part of the movie “Argylle”, and shooting for it will begin next month in Europe.

This began speculation that Cena might not be returning to WWE after all. However, that’s not the case.

The Wrestling Observer is reporting that Cena is locked in for the main event of SummerSlam 2021:

“No word on when he shows up for television, but Cena is free of responsibilities for acting work at this point and until after SummerSlam. Cena vs. Reigns is locked in as the main event for the show. However, Cena is in a movie called ‘Argylle’, a spy thriller which will be shooting in Europe in August. It’s possible he could start after or end prior to the date, or even get a few days off.”

With the shooting of his new movie coming up, Cena won’t stick around on WWE programming and will go back to Hollywood after SummerSlam is over.

Also Read: “What a way to set yourself up for disappointment” – John Cena Reacts To Drew McIntyre Wanting To Face Him

Johnny B. Badd wrestled for Ted Turner’s World Championship Wrestling from 1991 till 1996 and then joined the World Wrestling Federation in 1996, where he wrestled until 1999.

The last time we saw Marc Mero wrestle for a major promotion was during his TNA run in 2005, once again going by his WCW name Johnny B. Badd.

He was married to “Sable” Rena Mero, who is now the wife of “The Beast” Brock Lesnar.