A Q&A session with Old School WWF Legend “The Immortal” Hulk Hogan was recently uploaded to the Hulkster’s YouTube channel. Below are the highlights from this Q&A session:

My name is Wendy Allen I’m from St. Louis, Missouri. I can deadlift 355, what’s your deadlift?
“Wow, wow that is crazy. Wendymania deadlifting 355. Well my deadlift is pretty much dead in the water because I quit deadlifting and doing bench presses and any type of heavy squats almost 30 years ago. Once my knees started to get beat up from the wrestling I just switched over and started training body parts but I did have the size. I had the size originally so I just kept pumping blood in the arms and the legs and the chest to keep the size. But total props 355 is a pretty, pretty darn good pull and I just want Wendymania on my side. Thank you.”

Where did the name Hulk Hogan originate from?
“Okay. The Reader’s Digest version goes something like this: Started wrestling as Terry Boulder, wrestled as the Super Destroyer, wrestled as Sterling Golden, wrestled as Terry “The Hulk” Boulder for a while because I was actually bigger than Lou Ferrigno on the TV show. And when I went to New York, the very very first time Vince McMahon Sr. had all these ethnic characters like Chief Jay Strongbow for the Native Americans. He had Ivan Putski for the Polish Americans.

Bruno Sammartino for the Italian Americans and he goes I like the name Hogan. I want you to be Hulk Hogan for the Irish-Americans so Vince McMahon Senior gave me that name. I said wow was a Hulk Hogan sounds like a Hulk Hoagie or something but the name stuck it worked and it’s just incredible the name has just stood the test of time. But great, great question brother thank you.”

Where do you like to go on your vacation?
“When I go to on vacation, I go a little bit farther South to Key West, Florida. That way I can hang out. Double the boating fun! Double the fishing fun! Double the party fun! Key West is the place to be and it’s just for me. So, when I’m not in Clearwater I go on vacation it’s a simple hop skip and jump right down to Key West you gotta try sometime and maybe Donna I’ll see you there.”

If you could wrestle one Superstar in the current WWE right now, who would it be and why?
“Wow, that’s a really good question, Steve. Thanks number one for representing, Thanks for wearing the red and yellow I appreciate it and nobody knows how hot those boas are except for you and me. But if I could wrestle one WWE Superstar because I probably got one left in me, it’d be Braun Strowman because I know even though he’s getting over and he’s really getting over, I think if he ran into the power of Hulkamania it’d blow him and his career through the roof. But we’ll have a good time finding out what he’s made of brother, but Braun Strowman would be the guy to tie up with.” 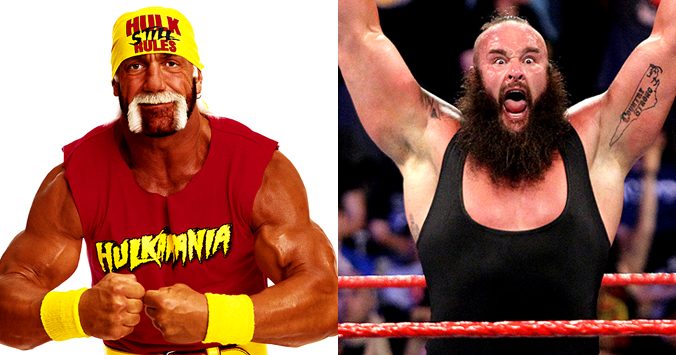 Do you still play the guitar?
“You know I quit playing guitar a long time ago, but every once in a while because Brooke is way into music I’ll pick a guitar up and mess around do some chord progressions and some changes with it but it’s kind of hard because after 35 years of wrestling and all the fingers that have kind of like been broken and messed up and everything. Um, it’s kind of hard to hang on to the neck for too long. Plus you got to play it all the time but once in a while I’ll pick it up brother you know and hang out with Brooke and do some music but that’s pretty much it. Now if I’d a been in the Rolling Stones or a real good rock n’ roll band I don’t know about this wrestling deal but just once in a while.”

Hulk Hogan vs. André The Giant (WrestleMania 3) by WWFOldSchool

That’s gonna be the greatest accomplishment you know slamming giants, selling out Superdomes, and WrestleManias. That was a lot of fun but when I look back from 40,000 feet up and look at what life’s all about is remaining the same person I’ve always been in my relationship with the fans. You guys know who I am that’s the biggest achievement brother.”

We were running three crews simultaneously and basically it was a one-hour action show we needed like nine or ten days to shoot an episode but I was partners with the Baywatch guys so we shot the whole episode weekly in six days. And then on the seventh day we’d start over again but at the end of the day there will not be another Thunder in Paradise. Chris Lemmon’s doing other stuff. Carol Alt’s doing other stuff. And I can’t spend that much time in a boat brother. So, love you, good question.”