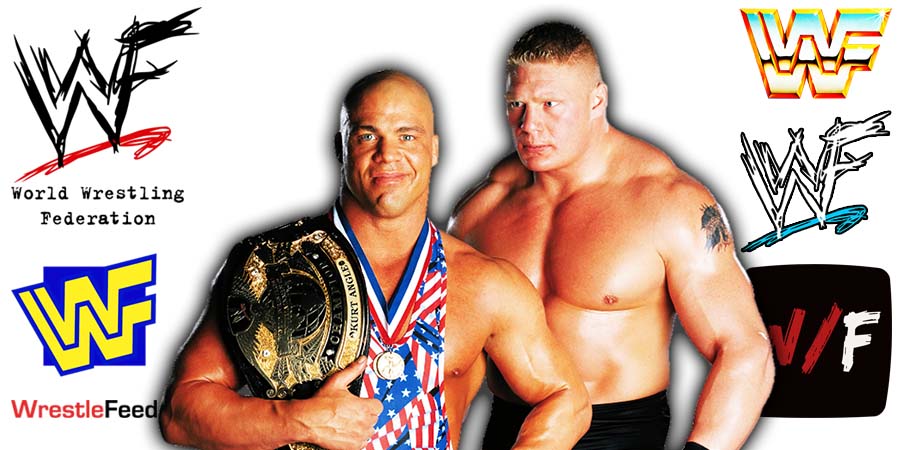 During a recent episode of his podcast, WWE Hall Of Famer Kurt Angle recalled mentioning Brock Lesnar & Goldberg during a promo in TNA back in 2007, to tease the possibility of them coming to Total Nonstop Action!

Angle said Vince Russo came up with this idea, and he agreed with it as Lesnar and Goldberg were Free Agents at that time:

“Well, Vince Russo was the creative guy behind this. It was his idea to mention Brock Lesnar and Goldberg, and I thought it was a good idea. A lot of fans thought when I came in that it was Goldberg.

So, you know, we were just trying to keep with that storyline that Goldberg could possibly come in there. So, it wasn’t a bad idea to do that.”

Lesnar and Goldberg were reportedly unhappy about being mentioning on TNA TV, and Angle had the following to say about it:

“No, they didn’t (talk to him about this situation directly), but I don’t understand why they would be so hot. I mean, this is publicity. They were free agents at the time. Anytime someone talks about a wrestler and not in a negative way, it’s always good publicity.”

As an WCW Original, who was trained in the famous ‘WCW Power Plant’ wrestling school, he debuted for Ted Turner’s promotion in 1995, billed as André The Giant’s son, called “The Giant”.

The Giant worked his first storyline (and won the belt in his first official match) against the greatest name in the history of this business, Hulk Hogan.

After leaving World Championship Wrestling in early February 1999, he signed with the World Wrestling Federation right away and debuted at the February 14th ‘WWF In Your House 27: St. Valentine’s Day Massacre’ PPV, under his real name, Paul Wight.

Soon adopting the name ‘The Big Show’, with the exception of his hiatus in 2007, he kept working for the (now renamed) WWE until 2021.